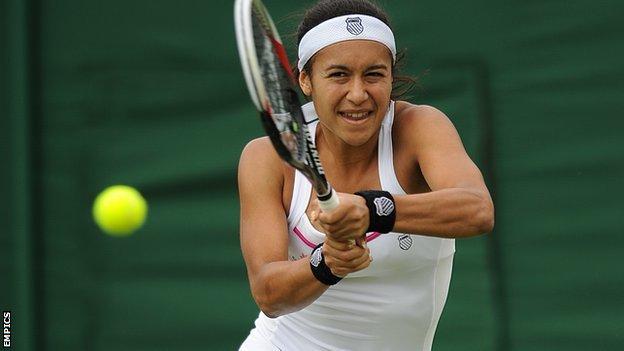 British number two Heather Watson is one of 12 top-100 stars to enter next week's Aegon Trophy in Nottingham.

The world number 92, a first-round winner at the French Open, is set to feature alongside British number three Johanna Konta and defending champion Petra Martic from Monday, 2 June.

But Watson could yet miss out on the Wimbledon warm-up if her good form continues on clay at the Roland Garros.

The Guernsey-born star, 22, faces Simona Halep in the second round.

Watson has now won 11 matches in May alone following victory at the Prague Open and is expected to climb back into the world's top 80, and regain the British number-one ranking, as a result of her run at the French Open.

Konta has climbed to a career-high ranking of 102 after reaching the semi-final of the ITF event in Saint-Gaudens earlier this month.

Tournament director Paul Hutchins said: "The Aegon Trophy has again proven to be a popular event for players looking to sharpen their grass-court skills in the run up to Wimbledon.

"Heather and Johanna are both great draw cards who will be particularly keen to find their rhythm on home soil."

As with the men's event, entry is free.