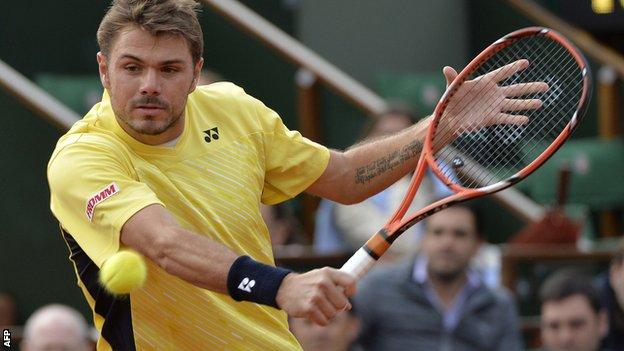 World number three Stanislas Wawrinka has been given a wildcard for the Aegon Championships at Queen's Club after his early exit at the French Open.

The 29-year-old suffered a shock first-round defeat by Spain's Guillermo Garcia-Lopez on Monday.

Wawrinka will use the tournament, which begins on 9 June, as part of his grass-court preparations for Wimbledon.

"I'm really looking forward to playing and very grateful the tournament saved a wildcard for me," said Wawrinka.

"I love London, I love the atmosphere. It is an important tournament with a lot of history, and playing at Queen's Club gives me the best possible chance to become comfortable on grass."

Wawrinka, the Australian Open champion, has lost in the first round in three of his last four visits to Wimbledon, including a straight sets defeat by Lleyton Hewitt last year.

British number one Andy Murray, Tomas Berdych, Jo-Wilfried Tsonga and Grigor Dimitrov are among the other star names in action at Queen's, while British numbers two and three Dan Evans and James Ward have also been given wildcards.