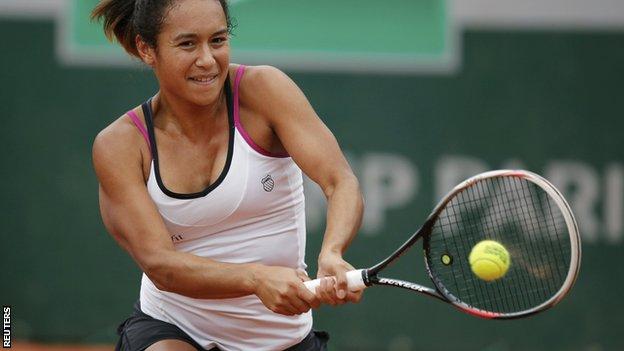 The Romanian broke serve five times in a 6-2 6-4 second-round win that took one hour and 19 minutes.

Halep is the second-highest seed left in the tournament and now faces Spain's Maria-Teresa Torro-Flor.

Watson, who had won her previous nine matches, will regain the British number one ranking from the injured Laura Robson next month.

The 22-year-old from Guernsey had enjoyed a terrific run of form that saw her win 11 matches in May alone as she battles her way back up the rankings after illness and injury last year.

"Simona was very happy to finish things off because it was beginning to get closer and tighter. Heather can be pleased with her performance and can look back at the video of this match and see what she did well and what she can improve on.

"If Heather had managed to get that second set to 5-5 and took it to a third set, who knows? Now Heather needs to work on the number of unforced errors she concedes. Then she can move to the next level."

Halep proved too much for the Briton, however, her accuracy keeping Watson constantly on the move and giving her very little to attack.

"She played well, but I didn't feel she was a total different level," said Watson, who revealed that she had been playing with a sprained ankle since last week.

"I felt she took advantage of a blip I had in the first set of not making many balls.

"That's what they do, the top players - they don't make any unforced errors. I know what I need to work on, but I also know that I'm not far off."

Watson recovered an early break of serve but slipped behind again in game five and, despite the encouragement of Argentine coach Diego Veronelli sitting courtside, she was finding the going increasingly heavy.

Halep, 22, began to dominate the Watson serve, winning nearly 60% of the points, and another break gave her the opening set in 34 minutes.

Watson hit a rasping backhand winner down the line to stave off an early break point in the second set but again the Romanian got the better of three breaks to take control.

There was no chance of Watson throwing in the towel and she had one last opportunity with a break-back point when Halep served for the match, but her return found the net.

A Halep backhand down the line set up a second match point and she thumped away a forehand winner, leaving Watson to smack her racquet on the clay in frustration.

"That last game could have really changed it," added Watson. "I felt she was a bit nervous in that last game. So was I, and I didn't take advantage.

"I'm disappointed that I didn't do better today. I really expected more from myself. It happens, and I'll just take these weeks as a positive for the grass."