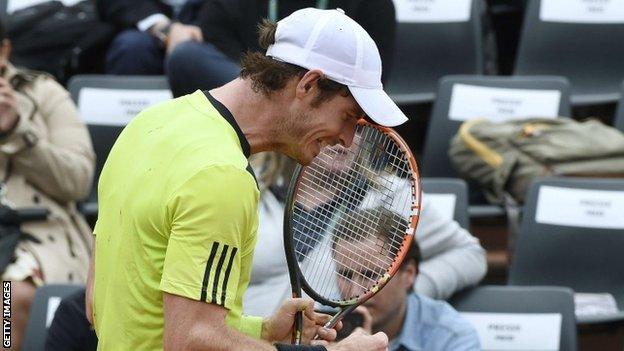 Andy Murray hopes to banish some bad memories when he plays Germany's Philipp Kohlschreiber at the French Open on Saturday.

Kohlschreiber, the 28th seed, beat Murray 6-2 6-1 in their only previous meeting in Monte Carlo four years ago.

"I remember not playing particularly well," the 27-year-old Scot said of their match in 2010.

"I was very disappointed after the match. It just wasn't a pleasant memory for me."

Kohlschreiber, 30, is running into form after winning his fifth career title in Dusseldorf last week, and taking his unbeaten streak to six matches with two wins in Paris.

Asked to choose the surface on which he would prefer to play Murray, he wasted no time in replying: "Clay."

"Winning a title is always very special," said the German. "It came at a great time, let's put it this way. I'm just enjoying at the moment the good run.

"[Facing Murray will be] unbelievably tough. He's a very solid player. He's a big fighter. You're going to work very hard for the points.

"Obviously over the last years he's in the top four, top five. OK, last year he had a much tougher year with the injury, but I think he's coming back stronger and stronger.

"He is going to be the favourite in the match, but I have nothing to lose and I'm looking forward to it."

Murray, 27, remains without a coach following the departure of Ivan Lendl in March, although he hopes to name a replacement before Wimbledon.

In the meantime, the Scot is focused on making real inroads at a tournament he missed last year through injury, having made the quarter-finals and semi-finals in previous years.

He expects Kohlschreiber to pose a far stiffer test than Andrey Golubev and Marinko Matosevic could muster in the opening two rounds.

"I played him once before on clay and I think I got three games or something," he added.

"He obviously won the tournament last week. He's not dropped a set here, I don't think. So, yeah, he will be very tough, he's a very good player."