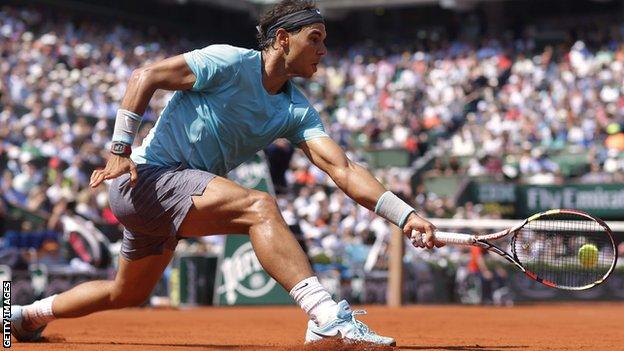 Kuznetsova next plays Lucie Safarova, who saw off Ana Ivanovic 6-3 6-3.

Fourth seed Simona Halep, the highest seed left in the women's draw, beat Maria-Teresa Torro-Flor 6-3 6-0 to set up a tie with Sloane Stephens.

American Stephens eased into the fourth round with a 6-3 6-4 win over Ekaterina Makarova.

Nadal's Spanish compatriot David Ferrer also won in the men's draw as he beat Andreas Seppi 6-2 7-6 6-3 to set up a fourth round tie against Kevin Anderson, who progressed after Ivo Karlovic retired hurt.

"I left out there everything I could," said Kuznetsova. "I came up with a win, but I was very close to the loss as well. I was very strong mentally and really happy with that."

"I felt a little bit my back so that's why I slowed down my service a little bit," said Nadal. "I had the problem in Australia. It's real but during my career I have had a few problems."

"I feel very bad. I have to say, I feel awful," says Petkovic, who has been suffering with a virus. "But I just tried to hang in there, you know. It's a Grand Slam."

"Definitely what I work on with Paul [Annacone, coach], it's developing," said Stevens. "It's a learning process, but it's been good. We're just one step at a time."

"I was pressuring Ana into her backhand side and then attacking the forehand side, which was working well," said Safarova. "I was serving decent, overall the game was really good."

Ivanovic, who has now lost five in a row against Safarova, said: "Every time, we have had tough matches in the past. I'm really disappointed that I lost but she's good player, and she played tough."

"For me it's always a pleasure, new experience," said Monfils. "The crowd is always different. Today was again amazing."

"I'm quite satisfied with the match," said Ferrer. "I would have liked to be more steady with my forehand and more consistent but, still, I'm happy."

"It's not a surprise, because I'm more confident now in myself," says Halep. "I feel the ball really good here in French Open. I love this tournament. I love to be here."

"There is still a lot of great players in the draw and still so many tough opponents to play against," said Jankovic.

"I don't care. I go on my way. That's what I have to say to you. Nothing more." Fabio Fognini is asked about his on-court antics.

Gael Monfils did his best to ignore the Fognini Show. "I wasn't focusing on him. I know sometimes Fabio talks or shows stuff and does stuff. I was too tired to watch him."

"I have made great friends with the bathroom the past day and night and today," says an ailing but victorious Andrea Petkovic.

"It was just an unbelievable match," says Svetlana Kuznetsova after her three-hour win. "I didn't enjoy myself out there."

"I want to improve more. I speak better than last year, but I still have to learn. Now I speak more with my coach in English, and it's good. The TV, sometimes, and now I started to read a book in English. Harry Potter." Romania's Simona Halep enrols at the Hogwarts School of English.

David Ferrer neatly sums up David Ferrer: "I do my best to be consistent, to be among the best. And I think this is an asset in a tennis career, to be this consistent."

Briton Jamie Murray and his Australian partner John Peers were beaten 6-3 6-1 by the number-one ranked Bryan brothers in the men's doubles.

There was also disappointment for Dom Inglot and Poland's Klaudia Jans-Ignacik in the mixed doubles, as they were beaten by Jonathan Eysseric and Alize Cornet.

Selfies of the day

They might be out of the tournament but Serena Williams and Caroline Wozniacki seem to be coping as they take in a Miami Heat play-off game.

Eugenie Bouchard takes a break from her tilt at a first Grand Slam to meet actor Owen Wilson.