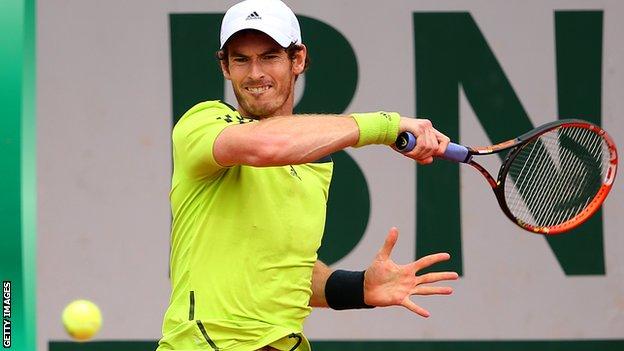 Andy Murray must recover quickly from Sunday's draining five-set win to take on Spain's Fernando Verdasco in the French Open last 16 on Monday.

The Wimbledon champion will meet the 24th seed in the third match on Court Suzanne Lenglen at around 14:00 BST.

Murray suffered cramp during his third-round win over Philipp Kohlschreiber and conceded it could be a factor.

I will try and give my all. I have nothing to lose. He is favourite because of his ranking

"Hopefully that will be enough."

Both men will be playing for a third successive day after completing their third-round wins on Sunday.

Murray has had to work harder across the last two days, however, taking just over four hours to see off Kohlschreiber, while Spaniard Verdasco took under two hours to beat Richard Gasquet in three sets.

"That was a good thing. When I woke up [on Sunday morning] I felt pretty decent. I was cramping [on Saturday]. My muscles were obviously fatigued.

"It wasn't something I went into the match with. It was the first five set match I played since my [back] surgery [in September]."

Murray had been close to beating the in-form Kohlschreiber in four sets and, despite the drama that followed, took satisfaction in the result.

"I've played well on clay the last few weeks, that's for sure," he said.

"This last match against Philipp could have been one of my best wins if I managed to close out the fourth set, because he's a very, very tough player.

Verdasco was the man Murray beat in five sets on his way to victory at Wimbledon last summer, and the Scot has a 9-1 record against the Spaniard.

"Not many people think I play particularly well on clay, so I would say that would give him an edge there," said Murray.

Verdasco, 30, needed five sets to beat Pablo Cuevas in round two and is through to the last 16 at Roland Garros for the first time since 2010.

"He has wonderful tennis, and he won Grand Slams already, so I think he deserves all my respect. It's not going to be an easy match.

"I will try and give my all. I have nothing to lose. He is favourite because of his ranking."