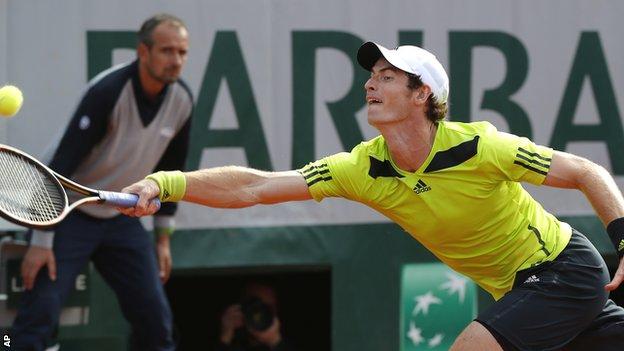 Andy Murray saw off a fired-up Fernando Verdasco in straight sets to reach the quarter-finals of the French Open.

The Wimbledon champion came through 6-4 7-5 7-6 (7-3) and will next face Frenchman Gael Monfils on Wednesday.

In the third set Murray conceded a point after a disputed line call to a furious Verdasco, before the Spaniard broke back in the next game.

"Murray enjoyed this duel of thrilling rallies so much, you started to wonder whether he was tempted by the prospect of a fourth set.

"He moved very well and hit the ball with real conviction. If he can improve his serve and become more ruthless with all the break points he generates, he will be a formidable competitor for the very best on clay.

"Winning in straight sets, albeit in nearly three hours, also spared the legs that put in a double shift against Philipp Kohlschreiber at the weekend."

Briton Murray weathered the storm, however, and won the tie-break to seal victory in two hours and 54 minutes.

"I was trying to play more aggressive today because I knew I was going to be a bit tired in my legs," said Murray, who was playing for the third day in a row.

"It's good to win in three sets, and playing against Monfils, I guess on centre court - it's going to be a great atmosphere and I'm really looking forward to it."

Murray, 27, improved his record against Verdasco to 10-1 as he again had too much for the 24th seed.

He had come back from two sets down in their last meeting on his way to Wimbledon victory last summer, and the 30-year-old Spaniard might have fancied his chances in their first meeting on clay.

It proved to be more one-sided encounter than on the grass, however, as Murray constantly threatened the Verdasco serve and became more comfortable on his own.

Murray made a slow start, seeing off three break points in the first game before swapping breaks in games three and four, but from then on it was the Scot who was in charge.

He attacked the Spaniard's weaker backhand side to break at 4-4, and pounced when his opportunity came at 5-5 in the second after a couple more loose efforts from his opponent.

The Briton chased down a lob on his way to converting set point, and the pressure only built on the increasingly frustrated Verdasco in the third.

He reached boiling point in game seven, heading to his chair after saving three break points - making it 10 for the set - only to find the umpire had called a serve out.

A furious tirade followed and Murray conceded the point having checked the mark, something he presumably regretted a few minutes later when a still fuming Verdasco broke back for 4-4.

"It was a great serve and I mis-hit the ball," Murray explained afterwards. "It didn't go in. I gave him the point."

The danger signs were flashing for the Briton but he calmly served his way to a tie-break, and then resumed his dominance.

A brilliant backhand cross-court pass gave him an early break and, after a 3-0 lead disappeared, he began looping balls and tempting Verdasco into errors.

A Verdasco forehand into the net duly gave Murray three match points, and the Scot smashed away a winner.

"It was an unbelievable atmosphere," he added. "I really enjoyed myself, we played some great points and he fought extremely hard.

"I was a bit nervous at the end but I am glad I managed to get through."

Verdasco was unhappy with the speed of the surface having played on the main Philippe Chatrier Stadium on Sunday.

"The court was very fast compared to the Philippe Chatrier," he said. "Completely a different tournament. For his flat shots was I think a good advantage.

"He played better than me. He played very deep."