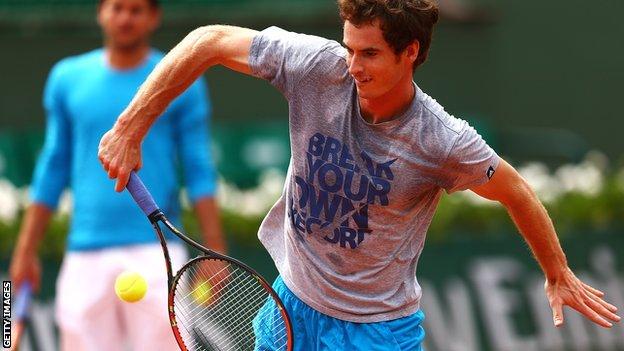 Andy Murray expects a "Davis Cup atmosphere" when he takes on home favourite Gael Monfils at the French Open on Wednesday.

It will be their fifth meeting as professionals, with Murray leading their head-to-head 3-2, but they have known each other since junior days.

"I hope now I'll be able to deal with the atmosphere," Murray told BBC Sport.

2008: Third round - lost to Nicholas Almagro

"Playing against someone with his style, who also tries to entertain the crowd, is something extra I'll have to deal with.

"But I'm looking forward to it."

Such is the draw of Monfils and the Wimbledon champion, the match takes place on the main show court at Roland Garros, with eight-time champion Rafael Nadal taking on fifth seed David Ferrer on Court Suzanne Lenglen.

It will be seventh seed Murray's first match of the tournament on the larger court, although he will have practised on there for two days running.

The flamboyant Monfils, seeded 23rd, is the older of the pair by eight months and they first played each other when Murray was 10 and Monfils 11.

"He was very similar to how he is now, sliding all over the court and chasing down incredible shots.

"We've always got on very well. I had quite a long chat with him in the locker room at the beginning of the tournament. We were talking about his dancing. He told me he wasn't that happy with his performance on the Kids' Day because the surface was a bit slippy and he hadn't been practising for about six months. Normally he spends an hour a day in front of the mirror practising. He's a fun guy to be around, and on top of that he's also a very good tennis player."

"He's just naturally a phenomenal athlete and you could see that even at that age."

Murray lost in five sets to Monfils on their only previous meeting at Roland Garros in 2006, and is well aware of what he will be stepping into.

"It's a great challenge," he said. "It's more like a Davis Cup atmosphere.

"I'm looking forward to the match - it's the quarter-finals of a Slam. I don't care whether no-one in the crowd wants me to win or everyone wants me to win.

"I will fight just as hard to try to get the right outcome."

Monfils, 27, has been playing without a coach for over a year and is thriving on the support of his compatriots in Paris.

"For sure it will help me if I have big decision in the match or I feel tired or maybe I'm down," he said. "For sure they will help me a lot."

Although Monfils won the last meeting between the two, that came four years ago and on an indoor court at the Paris Masters.

"It's been a long time," said the Frenchman "It's too far. I think Andy changed.

"He won Wimbledon, so for sure mentally it will be different for him. I think he's a good player and he comes back very strong now.

"After his [back] injury he struggled a little bit, and now he's more solid. He proved that on clay he's a tough opponent too."