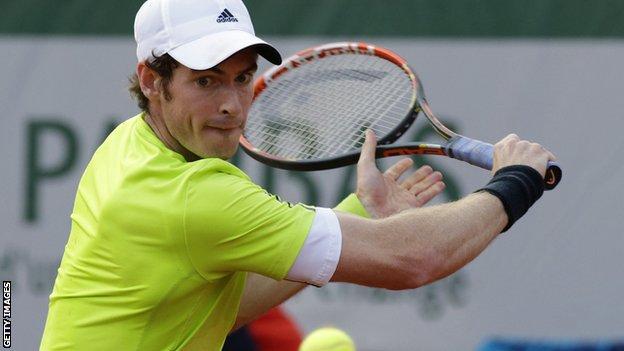 Andy Murray will not be overawed by eight-time champion Rafael Nadal when he attempts to reach his first French Open final on Friday.

Nadal has a 64-1 record at Roland Garros, but Murray is confident after reaching a 14th Grand Slam semi-final.

"It's definitely a big achievement, but that's not what I came here to do," said the Wimbledon champion.

"I expect a lot of myself. I put a lot of pressure on myself to perform well at these events, and thankfully I have done ok so far.

"There's still hopefully a long way to go in the tournament."

Murray might appreciate the extra few hours' rest after playing five sets for the second time this week, as he beat France's Gael Monfils in a dramatic quarter-final on Wednesday.

In 19 previous meetings with Nadal, the Scot has won just five times - and never in their five matches on clay.

Murray, 27, has taken a set on each of the last three occasions, however, and was encouraged by pushing Nadal close in Rome last month.

"I definitely learned some things in that match," said Murray. "It was quite clear in my head, as well, what was working and what wasn't.

"Conditions change, which makes a match slightly different, but there are some things I learned in that match that hopefully I can use to my advantage on Friday."

Much has changed for Murray since he lost in straight sets to Nadal in the 2011 semi-final, despite creating 18 break points.

"Murray's got an incredible return of serve and Nadal's serve could sit up a bit. I think he's one of the all-time great returners. Every shot matters and it's going to be a battle. You've got to accept the fact that you're going to be feeling pain, but you have to convince yourself that that feels good. If you get past that, you've got a shot at it. It's the hardest surface to maintain momentum. Suddenly you look up and just when you thought everything was under control, you're in big trouble."

"I obviously know how to win these tournaments now; back then I didn't," said the two-time Grand Slam champion.

"Hopefully that will give me a little bit more confidence and belief when I go on the court on Friday."

Nadal has dropped just one set in his five matches but arrived in Paris on the back of his worst clay-court season in 10 years, with three defeats and a lone title in Madrid.

The Spaniard, who turned 28 on Tuesday, also said he had a slight back problem earlier in the tournament.

He remains a strong favourite to extend his incredible record at Roland Garros, with just that one loss against Robin Soderling in 2009, but takes the Murray threat seriously.

"I'm not surprised Andy is in the semi-finals," said Nadal.

"Andy can play on all surfaces. There's nothing in his game that would prevent him from playing really well on clay. He's gone really deep in the tournament several times here."