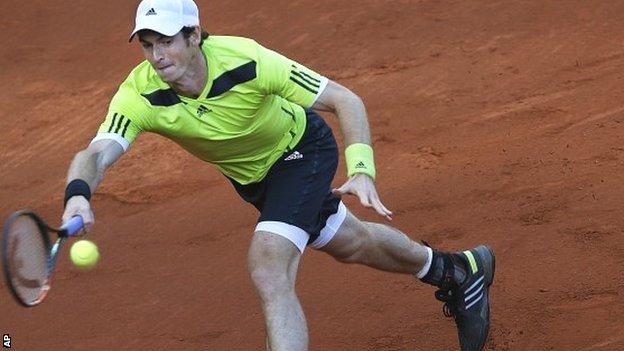 Andy Murray must make every shot count and be prepared for pain when he faces Rafael Nadal in the French Open semi-finals on Friday, says John McEnroe.

Defending champion Nadal has won eight singles titles at Roland Garros and has only lost once in 65 matches there.

"Every shot matters and it's going to be a battle," said McEnroe.

"You've got to accept you're going to feel pain but you have to convince yourself that that feels good. If you get past that, you've got a shot."

The tie is a repeat of May's Italian Open semi-final, which Murray lost in three sets despite looking "real good" according to McEnroe.

"If he's not able to get to the final, he'll still be able to use that confidence at Wimbledon," said the 55-year-old American, who won seven Grand Slams but was only ever a runner-up at the French Open.

"Murray has won 14 of his last 16 five-set matches and that mental strength is the difference between natural-born athletes like Monfils and true champions like Murray.

"Murray is playing some of the best clay-court tennis I have seen him play. To beat Nadal after playing two five-set matches is a massive challenge, but if Murray recovers well, he is in as good a shape as ever to meet it. "

The pair last played each other at Roland Garros in the 2011 semi-final, with Nadal proving too strong for the Scot in a straight-sets win.

But seven-time Grand Slam champion McEnroe said the British number one, who missed last year's French Open with a back injury and underwent surgery in September, was possibly playing the best tennis of his career on clay.

"When he played Nadal in Rome, he looked like he believed in himself, the most I've seen on clay in quite a while, at least a couple of years, maybe ever," McEnroe told BBC Radio 5 live.

"When all is said and done, you're talking about being out three months. It's at least another three to six months to get it all back. I think he was always thinking about Wimbledon."

You can listen to more from John McEnroe on BBC Radio 5 live sport from 19:00 BST on Thursday, 5 June.