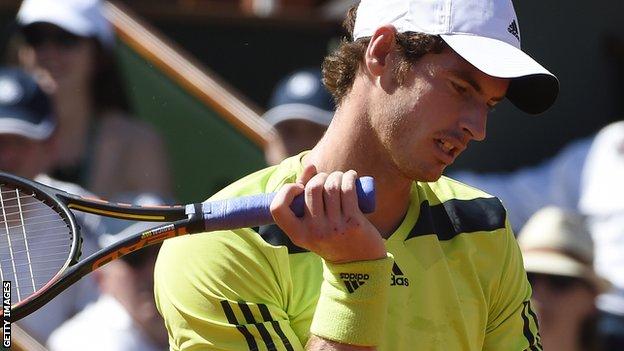 Andy Murray said he had never had a tougher match against Rafael Nadal after losing their 20th encounter in straight sets at the French Open.

"That's the toughest match I have played against him."

Murray was playing in his second semi-final at the French Open, having also been beaten by Nadal in 2011 and this time the Briton failed to earn a single break point.

Nadal took his record in Paris to 65 wins and one defeat and Murray was unhappy he had not provided a sterner test.

"Coming in there were loads of people that wouldn't have expected me to get to the semis," said the Scot.

"Once you get there, you obviously want to try and give yourself an opportunity, and I didn't give myself a chance in any of the sets today.

"That's why I'm disappointed, because you want to be competitive. You want to make it hard for him. I wasn't able to do that."

Murray remains without a coach since the departure of Ivan Lendl in March and said the chances of him announcing a replacement before Wimbledon are "50/50".

The Scot continues to work with Dani Vallverdu as part of his team and did not feel the lack of a senior coaching figure was behind his loss to Nadal.

"You can go out there with all the tactics in the world but when he's hitting the ball like that, it's very difficult to hit the ball where you want to," said Murray.

"So I don't really think that's down to a coaching decision. A lot of it comes down to how well he plays."

Murray will now return to the UK, where he defends his Aegon Championships title at Queen's Club next week before attempting a second Wimbledon victory later this month.

"I think going on to the grass in some ways will help me," he said.

"I have a lot of good memories from the grass-court season over the last couple of years. I hope I can play some good tennis."