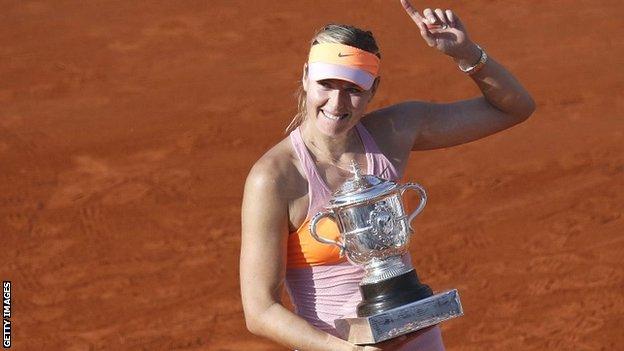 Maria Sharapova described winning a second French Open title as "amazing" after struggling on clay for many years.

It's such an emotional victory for me in my career

"I didn't grow up on clay; didn't play on it," she said. "I just took it upon myself to make myself better on it.

"There is no one else that was going to do that for me. I had to do the work and I worked to get to this position."

Sharapova won Wimbledon aged 17 and within four years had added the US Open and Australian Open titles, but in her early years she famously described her movement on clay as being "like a cow on ice".

"You're not just born being a natural clay court player. OK, maybe if you're Rafael Nadal, but certainly not me.

"It's really amazing. There is no substitute to these titles."

Sharapova missed the second half of 2013 with a shoulder injury and will move back up to fifth in the rankings next week, with no points to defend for the rest of the year after Wimbledon.

Halep had been hoping to cap a remarkable 12 months that has seen her rise from outside the top 50 to a new high of three in the world next week.

The 22-year-old broke down in tears at the end of the final, but was soon able to reflect on a breakthrough fortnight in the French capital.

"I was crying at that moment for a few minutes, and then I was smiling," she said.

"Because it was my first Grand Slam final I have to be happy, to smile, because I did everything on court.

"I played very good tennis, so I'm really proud about these two weeks."

Sharapova was warned for her pace of play between serves in the final set, a feature of her matches over the fortnight, but Halep played it down.

"It's her style and I don't want to say anything about this," said the Romanian.

"It's normal. She does this always, for me it wasn't too bad, but sometimes I felt a little bit nervous during that moments."

Sharapova, who also won the French Open in 2012, said: "I think the rules are a bit different at the Grand Slams, and I might have to speed it up a bit at these tournaments."