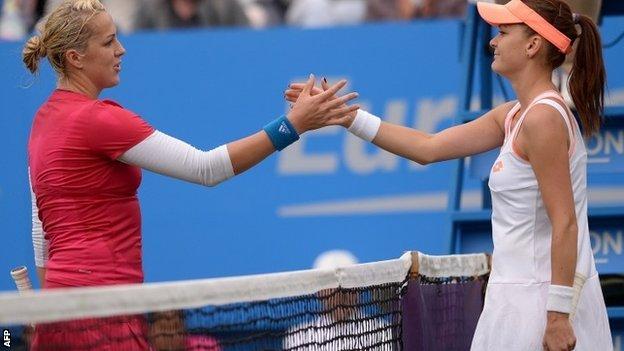 Top seed Agnieszka Radwanska made an early exit for the third year running at Eastbourne.

It was a good match, I just didn't take the chances when I had them... I'm pretty angry

In the men's event, British number two Dan Evans and teenager Kyle Edmund lost in round one.

"It was a good match, I just didn't take the chances when I had them," said Evans, who was beaten 6-2 6-3 by Gemany's Tobias Kamke.

"I'm pretty angry right now. It's annoyed me that much."

Edmund, 19, has risen to 282 in the rankings from outside the top 400 this time last year, but could not match his achievement of 2013, when he reached the second round place at Eastbourne.

Watched by coach Greg Rusedski, he lost 7-6 (7-5) 6-3 to American Sam Querrey after dropping serve for the first time at 3-3 in the second set.

Asked about his new full-time arrangement with Rusedski, Edmund said: "It's seven weeks we have been working together now, so it's going well. There is lots of positive stuff going on."

Radwanska, 25, suffered her third consecutive first-round loss in Eastbourne, but in the last two years has gone on to reach the final and semi-finals at Wimbledon.

"I just hope I can do the same good results this year," she said. "We'll see. Hopefully I can still do great at Wimbledon."

Wozniacki is a former world number one but currently ranked 16th. She arrived in Eastbourne on the back of a first-round loss at the French Open, after which she headed to Miami for a break.

"I just love spending time with my friends and my family and the people closest to me," said the Dane.

"I think to be able to perform 100%, you have to have a clear mind and you have to want to get out there and practice.

"I felt like I needed it for a few days, and when I came back home I was ready. I was ready to go."