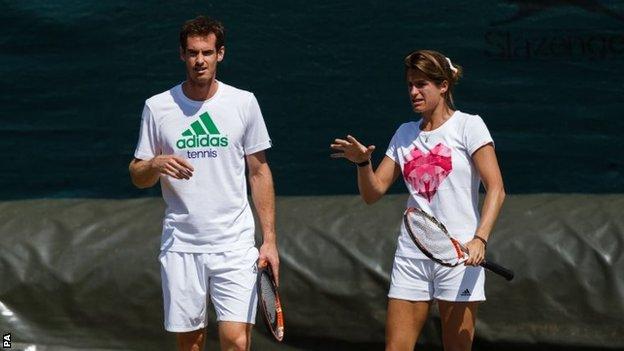 Virginia Wade says she was shocked by Andy Murray's decision to appoint Amelie Mauresmo as his coach.

British number one Murray, who starts his defence of his Wimbledon title on Monday, began work with Mauresmo, 34, earlier this month.

"It's hard to read him. Mauresmo was a total shock - I thought they were all fooling around. He's maybe trying to mess with everybody," Wade, 68, said.

"She was a great player; she's a great person. I think she was a little fragile mentally because she had the capabilities of beating everybody.

"She's laid back. She's a very nice, mature person, but I can't work it out at all. You like to try to get behind people's thinking but I can't really with this one. You try to see what somebody's going to offer that player."

In 2012, Murray, who parted company with previous coach Ivan Lendl in March, defended himself after Wade - the last British winner of the Wimbledon women's singles, in 1977 - described him as a "drama queen" during the French Open.