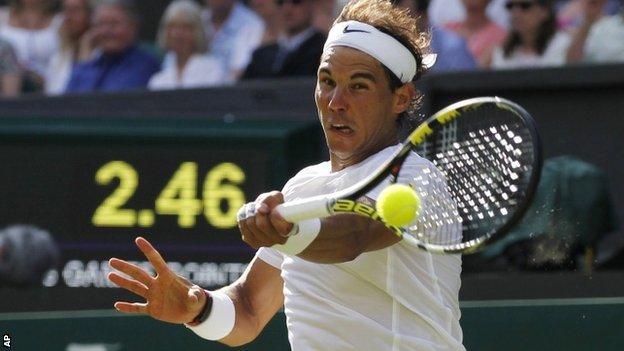 Rafael Nadal is unfazed by his second-round match at Wimbledon which pits him against the man who beat him in 2012, says his coach and uncle Toni Nadal.

The Spaniard lost a five-set thriller to Lukas Rosol, who was ranked 100 in the world, at the same stage of the tournament at the All England Club.

"That defeat cannot affect the match," said uncle Toni. "I think Rafa is better now than he was in 2012."

Nadal, who beat Martin Klizan in four sets in the first round on Tuesday, reached five Wimbledon finals in six years between 2006 and 2011, winning the title in 2008 and 2010.

However, he has failed to make it past the second round in each of the last two tournaments at the All England Club, losing to Steve Darcis in the first round last year.

Uncle Toni believes Nadal, who spent eight months out with a knee injury following the defeat by Rosol, is in better shape this year than he has been for two years for the rematch against the Czech.

"It's a different Rafa Nadal than two years ago," he said. "A better Rafa Nadal. In 2012, he had many problems when he arrived at Wimbledon.

"Rafa struggled in every practice, he couldn't go down on his knees, which is important on grass, and his mentality was not good enough for that reason.

"But now he has good movement and not much pain. He is the number one in the world and that should give him some confidence.

"Of course, Rafa can lose because Rosol is a good player and he has a good serve, but I hope Rafa is good enough to beat him."