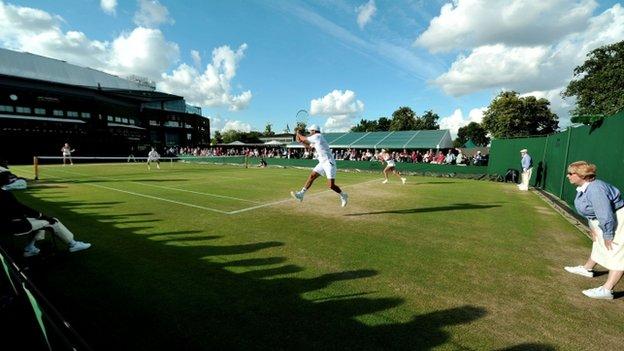 A stellar cast is in action at Wimbledon at the start of the second week, with men's and women's fourth-round matches due to be played and some third-round matches still to take place after a rainy Saturday.

Defending champion Andy Murray and former winners Novak Djokovic and Maria Sharapova are all set to be in action.

Today at Wimbledon tells you everything you need to know, from who is playing, to which players to watch out for and how to ensure you do not miss any of the action.

Andy Murray made it through the first week of his Wimbledon title defence without dropping a set, but will face a challenge unlike any in his three matches so far when he plays South African Kevin Anderson.

The 6ft 8in world number 18 won through to the fourth round for the first time as his formidable serve proved too much for Italian Fabio Fognini.

Murray's route to the final, based on seedings, would continue with Grigor Dimitrov in the quarter-finals, Djokovic in the semi-finals and Rafael Nadal in the final.

Centre Court held its breath when Novak Djokovic suffered a heavy fall against Gilles Simon in the third round, but the top seed recovered to win in three straight sets.

The Serb will play Jo-Wilfried Tsonga, a man he has beaten in their past eight meetings, for a place in the quarter-finals.

The pair played a five-set classic at the 2012 French Open, when Tsonga lost after failing to convert four match points, but Djokovic was a more comfortable winner of their rematch at the same event earlier this year.

The winner of this one will face Andy Murray in the quarter-finals, provided the defending champion overcomes Kevin Anderson in his own fourth-round match.

Dimitrov, who won the Queen's title earlier this month, was wobbled by Alexandr Dolgopolov last time out before coming through in five sets. Argentine Mayer felled 25th seed Andreas Seppi in the opening round.

Cornet's reward for beating five-time champion Serena Williams on Saturday is to open the second week on Centre Court.

The Frenchwoman recorded her second victory of the year over world number one Williams, despite losing the first set 6-1.

Teenager Bouchard, who has reached the semi-finals of both the Australian and French Opens this year, won her first WTA title in May.

Radwanska, the 2012 runner-up, comes up against her first seeded opponent in the shape of Russian Makarova.

Pole Radwanska, who lost in the first round at Eastbourne in her only grass-court warm-up event, made last year's semi-finals before falling to Sabine Lisicki.

Former world number one Caroline Wozniacki has made short work of her first three opponents, beating Shahar Peer, Naomi Broady and Ana Konjuh in straight sets. She has dropped just 11 games so far in the tournament.

Zahlavova Strycova is in the fourth round for the first time after beating second seed Li Na in the round three. 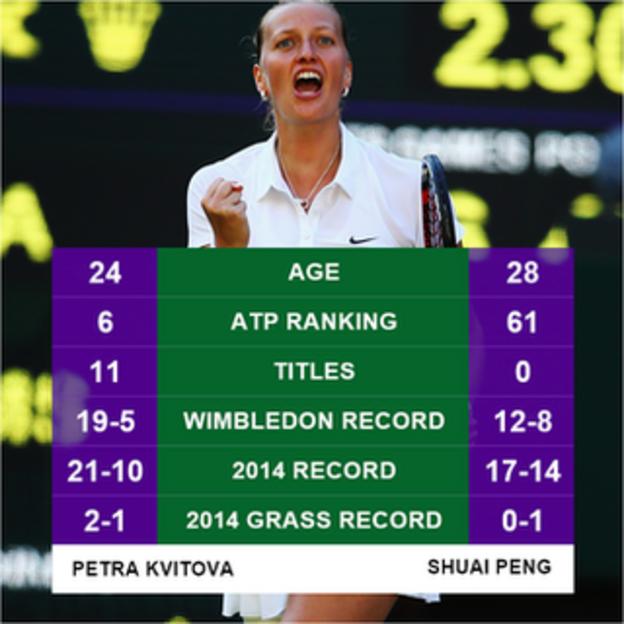 Petra Kvitova was touted as a possible serial champion after her triumph as a 21-year-old in 2011. The Czech left-hander has yet to deliver on that promise though, too often let down by erratic shots and apparent mental fragility.

But the sixth seed, due to play around 14:30 BST, successfully negotiated her way past a spirited Venus Williams in the third round and looks to have overcome the hamstring injury that curtailed her Eastbourne campaign early.

Either Wozniacki or Zahlavova Styrcova await in the quarter-finals, presuming she overcomes China's Shuai Peng. Wimbledon represents her best Grand Slam performance of the year regardless after a first-round defeat in the Australian Open and a third-round loss at Roland Garros.

Australian Open champion Stan Wawrinka had a miserable time at the French Open, getting knocked out in the first round.

However, the Swiss is one win away from equalling his best performance at Wimbledon. He takes on Denis Istomin (11:30 BST start) for a place in the fourth round after his match on Saturday was cancelled.

Czech world number 23 Lucie Safarova is playing for her first quarter-final appearance at Wimbledon. Indeed her only appearance in the last eight of a Grand Slam was at the 2007 Australian Open.

Her compatriot and opponent Tereza Smitkova is ranked 152 places lower and made her first Grand Slam main draw through qualifying.

Novak Djokovic faces Jo-Wilfried Tsonga in one of the games of the day, with Djokovic looking to extend his winning streak against the Frenchman to 10 games. In their most recent meeting, at this year's French Open, Tsonga won just six games.

Sixth seed Petra Kvitova takes to the garden: "Getting creative with our practice because of the rain at Wimbledon : )"