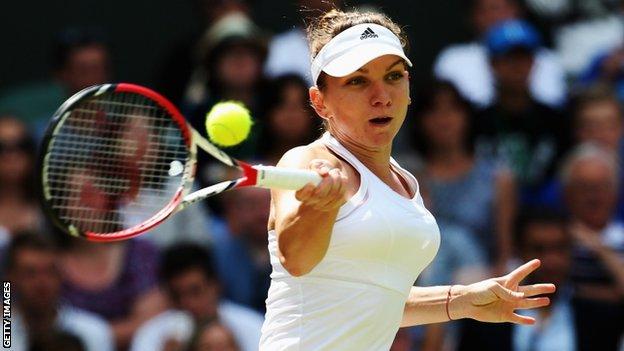 Thursday is women's semi-finals day at the All England Club, with four players fighting it out to be in Saturday's final.

After a difficult season, Kvitova is showing the form that took her to the Wimbledon title three years ago.

The sixth seed is the only former Grand Slam winner left in the women's draw and has won each of her five previous meetings with her compatriot Lucie Safarova.

Safarova, 27, is competing in her first Grand Slam semi-final against her friend and fellow left-hander.

It is the first time two Czech women have competed in the last four at a Grand Slam since Hana Mandlikova and Helena Sukova at the 1986 French Open.

Rising Canadian star Eugenie Bouchard is looking to make it third time lucky after losing in the semi-finals at the Australia Open and French Open this year.

Bouchard won the junior title at SW19 in 2012 and is yet to lose a set in this year's tournament.

Halep won their only previous meeting over three sets at Indian Wells in March.

Andy Murray may be out of the tournament, but his brother Jamie is in mixed doubles action on Centre Court on Thursday.

Murray and his Australian playing partner Casey Dellacqua will take on Horia Tecau of Romania and Sania Mirza of India in the third round.

Murray won the title alongside Jelena Jankovic in 2007.

By beating Nick Kyrgios, Milos Raonic became the first Canadian man to make the semi-finals since William Johnston in 1923.