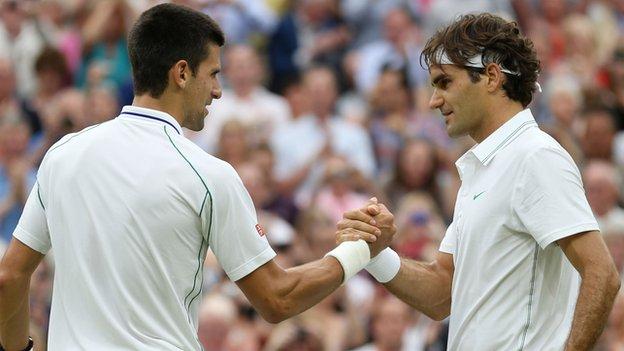 Roger Federer and Novak Djokovic will both attempt to reach the Wimbledon final on Friday, with two emerging stars of men's tennis in their way.

Djokovic, the number one seed and 2011 champion, takes on Bulgarian Grigor Dimitrov, who beat Andy Murray.

Neither Raonic nor Dimitrov have reached a major semi-final before, while Federer and Djokovic have won 23 Grand Slams between them.

Many British fans were anticipating a repeat of the 2013 final in this match, but Grigor Dimitrov's straight-sets win over Andy Murray put paid to those expectations.

Instead last year's runner-up Djokovic will hope to exploit experience built up over 22 previous Grand Slam semi-finals against a man playing in his first.

Djokovic, who was taken to five sets by Marin Cilic in the last eight, has spent the most time on court of any of the four semi-finalists at 12 hours and seven minutes - almost two hours longer than Dimitrov.

The Serb has won three of the pair's four previous meetings however, dispatching Dimitrov in straight sets in their most recent meeting at Roland Garros.

While Djokovic will return to the top of the world rankings with victory in Sunday's final, Dimitrov would achieve a piece of national history if he wins. The 23-year-old would be the first Bulgarian player to reach a Grand Slam final.

Djokovic: "The fact that Dimitrov hasn't lost a match in the grass-court season this year says enough about his quality. I'm sure many people look at him as a potential Grand-Slam winner.

"We have these youngsters coming up, fearless on the court, hitting the ball, not caring who is across the net. It's good, it gets more attention to new faces and to new wave of generation that is able to challenge the best and be contending for Grand-Slam titles."

Dimitrov: "We all know how Novak is competing and how he's playing when he's at his top level. I'm of course not expecting an easy match. But I'm out there to go through a match, to win it.

"Now it's a semi-final match. He has the experience and all that behind him, but at the same time, I've been playing great tennis. I believe in my skills at the moment."

After suffering a shock second-round defeat by Sergiy Stakhovsky in 2013, Federer is back at the business end at Wimbledon.

The last of his 17 Grand-Slam titles came at SW19 two years ago, but the world number four has reached a ninth semi-final, having never lost in any of his previous eight.

He made the last four with a high quality four-set win over Swiss compatriot Stanislas Wawrinka and has dropped only one set in the entire tournament, but faces a severe test in the shape of 23-year-old Raonic.

A huge server, he belted down 39 aces in the four-set quarter-final win, after which he spoke of desire to become the world number one.

Federer: "He's got a big serve. It keeps him in the match because it doesn't matter almost how he plays his return game. He's been serving very well for this entire tournament.

"On the grass with a serve like that it's never going to be an easy match. That's where you then sort of go back to your own game and say, I'll take care of my own serves and see what I can do on the return. That's my mindset."

"I'm playing a guy that is standing in my way of what I want to achieve, and I've got to focus on everything that's there, on the situation, how best to deal with it to give myself the best possibilities to achieve what I want."

British pair Naomi Broady and Neal Skupski will hope to reach the mixed doubles semi-finals when they take on 16th seeds Aisham Qureshi of Pakistan and Vera Douchevina of Russia in the second match on Court One.

Jamie Murray and his Australian partner Casey Dellacqua, the 10th seeds will also be in mixed doubles quarter-final action in the third match on Court 12 against 14th seeds Max Mirnyi of Belarus and Hao-Ching Chan of Chinese Taipei.

The wheelchair doubles also get underway with Britain's Jordanne Whiley hoping for a third Grand Slam title of the year with Japanese partner Yui Kamiji in the semi-finals against Germany's Katharina Kruger and Sharon Walraven of the Netherlands while fellow Briton Lucy Shuker and partner Sabine Ellerbrock of Germany take on defending champions Jiske Griffioen and Aniek van Koot of the Netherlands.

A final between Dimitrov and Raonic would be the youngest Wimbledon final - in terms of combined ages - since 2006 when a 24-year-old Roger Federer beat a 20-year-old Rafael Nadal.