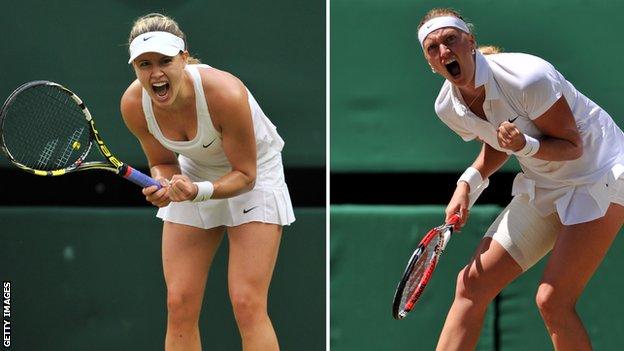 Petra Kvitova will attempt to win the women's singles at Wimbledon for the second time when she meets Eugenie Bouchard in Saturday's final.

Czech Kvitova, the 24-year-old sixth seed, has not reached a Grand Slam final since she beat Maria Sharapova to win the Wimbledon title in 2011.

Bouchard, 20, is the first Canadian to play in a major singles final.

The 13th seed, who reached the last four of the Australian and French Opens this year, is yet to drop a set.

For much of this year's Wimbledon Championships, talk has surrounded a supposed changing of the guard in both the men's and women's games.

Though the men's final features familiar faces Novak Djokovic and Roger Federer, we witness the beginning of a new era in the women's game, with two players born in the 1990s in a Grand Slam final for the first time.

For Bouchard, the 2012 girls' champion, a run to the final might represent natural progression following two Grand Slam semi-final appearances already this year, but this is still only her sixth appearance in one of the top four tournaments.

Her route to the final could have been blocked by Serena Williams and Maria Sharapova but, instead, she disposed of their respective conquerors, Alize Cornet and Angelique Kerber.

But she saved her most impressive performance for the semi-final, brushing aside Simona Halep, the third seed and form player of the past 12 months, in straight sets.

If she is successful, Bouchard will become the youngest Grand Slam winner since Sharapova's victory in the 2006 US Open final aged 19.

For that to happen, she must find a way past Kvitova, a name not often mentioned as part of the new breed, but still only 24.

The left-hander is bidding to become only the fourth multiple Wimbledon champion since 1990, following Steffi Graf and the Williams sisters.

On her run to the final, Kvitova has not had to beat an opponent ranked inside the world's top 10, a trend that will continue when she meets world number 13 Bouchard.

However, she did defeat five-time champion Venus Williams in round three before beating fellow Czechs Barbora Zahlavova Strycova and Lucie Safarova in the quarter-finals and semi-finals respectively.

Regardless of the result, 2014 is the third successive year in which the first three Grand Slams will be won by three different players, following Li Na's success at the Australian Open and Sharapova's Roland Garros victory.

Bouchard: "I'm looking forward to having my toughest match at Wimbledon yet. I'm going to go out and really just try to go for it and take my chances. I know I'll have really tough opposition. That's what you have to expect in a Grand Slam final.

"I'm still in the middle of a tournament so I'm not really looking at outside things or focused on all the other attention because I don't want to get distracted. After the tournament I can reflect on it. It's my dream to play a big match like this."

Kvitova: "I learned a lot in 2011. It was a big surprise for me that I was in the newspapers and everything. I didn't know before how it feels. I'm used to it now and I know probably how to handle it. I hope this experience can help me.

"Bouchard is playing a very solid game. I beat her for the first time last year in Toronto, but it's a long time ago. It was on the hard court. This is totally different. I have to use my left-handed serve a lot and to be aggressive. That's my game. That, I think, can be the key. "

Bouchard has a twin sister named Beatrice, who is six minutes older. The siblings are named after Prince Andrew's daughters.

Kvitova was involved in the first all-left-handed Grand Slam semi-final in 22 years when she beat Lucie Safarova. The last time two left-handers played in a Grand Slam semi was at Wimbledon in 1992, when Monica Seles beat Martina Navratilova in three sets.

Defending champions Bob and Mike Bryan play in the men's doubles final - their first Grand Slam decider since winning the title at SW19 12 months ago.

The American twins have a record 15 Grand Slam doubles titles, including three at Wimbledon, and will play American Jack Sock and Canadian Vasek Pospisil, who are first-time finalists.

Errani and Vinci won the French and US Opens in 2012 and are the defending Australian Open champions. Victory on Saturday would see them become the first pair to complete the Grand Slam set since Venus and Serena Williams in 2001.

The men's wheelchair doubles also get under way, with Britain's Gordon Reid and Tom Egberink of the Netherlands facing a tough semi-final against defending champions Shingo Kunieda from Japan and Frenchman Stephane Houdet.