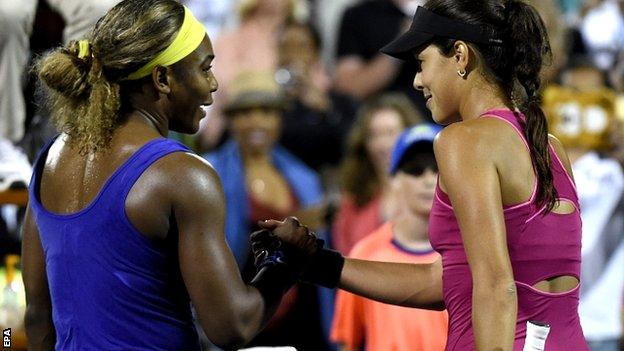 Serena Williams came through a testing three-set battle with Ana Ivanovic to reach the semi-finals of the Bank of the West Classic in Stanford, USA.

"It was really important for me," said Serena, playing her first event

Ivanovic, who will return to the top 10 next week for the first time in five years, had beaten the American at the Australian Open in January.

"I wanted to come out with the win no matter what," added Williams. "I can play loads better and that's good that I believe that. I thought we both played very well."

Petkovic, who reached her first Grand Slam semi-final at the French Open in June, raced into a 6-1 2-0 lead over Venus Williams but was eventually relieved to serve out in the final set at the second time of asking.

Asked about the prospect of facing both Williams sisters within 24 hours, the German eighth seed said: "You don't ever have the feeling you have something under control when you play either of them.

"They can hit so hard, and play consistently well. You always have to be on your toes."

In the other half of the draw, German third seed Angelique Kerber swept past Spain's Garbine Muguruza 6-2 6-1, and unseeded American Varvara Lepchenko thrashed qualifier Sachia Vickery of the US, 6-1 6-0.

In Washington, Britain's Jocelyn Rae and Anna Smith lost 6-1 1-6 12-10 to Hiroko Kuwata and Kurumi Nara of Japan in the semi-finals of the Citi Open doubles.