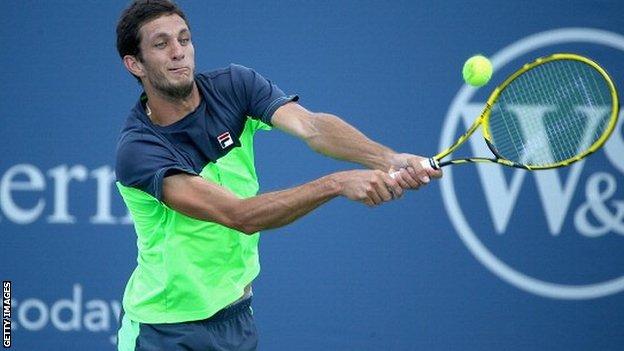 Britain's James Ward comfortably progressed to the second round of qualifying for the US Open with a 6-2 6-2 victory over Bosnia's Aldin Setkic.

Londoner Ward, the only survivor of five Britons in the first round, will next play France's Vincent Millot.

The 27-year-old is at a career-high 131 ranking and will be looking to make his first US Open main draw.

Dan Evans, 24, was unable to repeat last year's feat of qualifying for the main draw after a first-round loss.

The defeat means Evans, currently 176 in the world, will fall outside the world's top 250.

Twelve months ago Evans made his major breakthrough by qualifying for the main draw, reaching the third round before losing to Spain's Tommy Robredo, but he has been unable to build on that success.

He missed a glorious opportunity to beat world number 132 Wang, who saved match point with an ace and went on to secure victory in two hours and 32 minutes.

It means hopes rest on 15th seed Ward, who is scheduled last on Court 13 on Thursday.