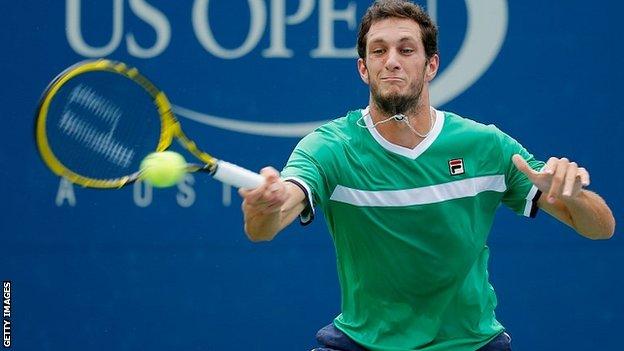 British number two James Ward missed out on a place in the US Open main draw after losing his final qualifying match against Moldova's Radu Albot.

The Londoner had been trying to qualify for the first time in New York and join fellow Britons Andy Murray and Heather Watson in the singles draws.

McGee, the world number 195, came through a dramatic match on a packed Court Eight at Flushing Meadows to reach the main draw of a Grand Slam for the first time in his career.

The noise from that match could be heard on Court Six, where Ward made a shaky start as his forehand misfired badly.

Ranked at a career-high 131 in the world - 74 places higher than his opponent - Ward looked in trouble until he finally converted a break point at the seventh attempt to lead 4-2 in the second set.

With confidence renewed, the Englishman levelled the match and appeared to have the upper hand early in the third, only for the rain to arrive after Albot opened with a service hold.

The two-hour break that followed clearly helped the Moldovan, as he came out firing on all cylinders when play resumed.

Ward played a sloppy service game to fall behind at 3-1 and was always on the back foot against Albot's more consistent baseline game.

Albot thought he had won it with a forehand down the line on his first match point, only for the umpire to call it out, but moments later the 24-year-old thumped away a smash to secure his debut in a Grand Slam main draw.

It is the second year in a row that Ward has lost a three-set match in the final round of qualifying.