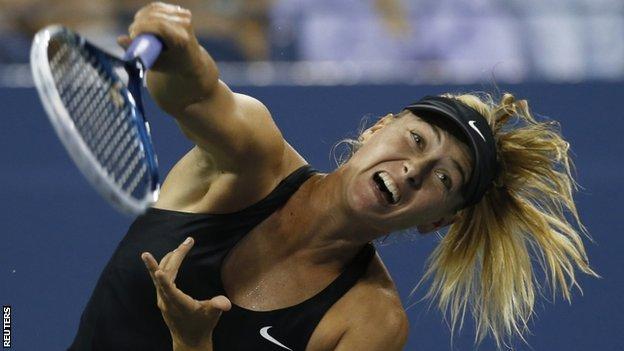 Maria Sharapova started her bid for a second US Open title with a 6-4 6-0 first-round win over fellow Russian Maria Kirilenko.

In the men's draw, world number one Novak Djokovic also eased through.

But the 19-year-old received two code violations in the third set and then a third warning in the fourth, which saw him penalised a game.

Two-time US Open champion Venus Williams fought back from a set down to win 2-6 6-3 6-3 and end 43-year-old Kimiko Date-Krumm's US Open hopes.

"After the first set I did very well," said Halep, 22. "I played better than the first set. I started a little bit nervous, but it's normal."

There were 13 breaks of serve between Williams, the second oldest player in the women's draw, and Date-Krumm, the oldest. "I was younger today, but when you step out on the court, I don't think anybody thinks about age," said Williams, 34. "If you're out on this tour it means you deserve to be here."

"We spent a lot of time in the juniors away from the courts practicing a lot together, competing against each other," Sharapova said of her compatriot Kirilenko, who is also aged 27. "We certainly have a big history together. But when you go out on the court, of course you want to be the winner, you have to face that person as a competitor, not someone that you've known for years and developed a friendship with. It's always a tricky balance, I guess."

"I didn't have much time to think about tennis with all this happening," said the newly-married Wimbledon champion, who has also just become a father for the first time. "The last three weeks actually, Toronto and Cincinnati, were a bit tough emotionally for me. I wasn't finding my game. I wasn't able to feel comfortable on the court. I probably was not mentally ready to still compete at a high level. But now it's different. I feel emotionally recharged and ready to go."

"First match is always tricky, but I think everything was working my way - a pretty good start for me," said Radwanska, who took just 47 minutes to overcome Fichman.

Raonic hit 20 aces in his victory over the Japanese qualifier, including the fastest serve of the day. That was a 140mph second serve, which he says he has done before. "Plenty of times, yeah. I just have freedom to go for it and I hit it like a first serve."

"The first round of a Grand Slam is always difficult just because you come from another tournament, from different conditions," Tsonga said afterwards. "Every tournament is different. Every time when you have to change it takes time to play your best tennis on the surface."

Andy Murray is looking everywhere for answers to his early bout of cramp. "I don't think I was that dehydrated, because I needed to go to the toilet when I got off the court. And not to be too graphic, but it wasn't like it was like brown."

If she could change one rule in tennis, Maria Sharapova says she would start charging players for taking medical timeouts. "I think we'd all see who really uses them and who doesn't," she laughed. "I don't know what we put on it, maybe like $2500 or something. We should do that. That would be fun."

Nick Kyrgios was well aware that he was one code violation from a default against Mikhail Youzhny. "I guess it was just heat of the moment. I was frustrated with the way I was playing. It was just an outburst, and hopefully I will be able to control that the next time I play."

Venus Williams feels a sprightly 34 years old after beating Kimiko Date-Krumm, aged 43. "According to Kimiko I have another decade. She set the prime example. She's top 100 and no-one can beat her easily. Yeah, she's breaking the mould."

US college champion Danielle Rose Collins does not have long to enjoy taking a set off world number two Simona Halep. "We'll probably try to look into flights and stuff tonight or tomorrow unfortunately. It's going to be a quick turnaround, and then first day of classes is tomorrow. I'll be in class this time tomorrow."

There were contrasting fortunes for Britain's two singles players in action on day one.

Heather Watson will begin her campaign against Sorana Cirstea on Tuesday.

Venus Williams and Kimiko Date-Krumm had to deal with a couple of persistent opponents who interrupted their match on Arthur Ashe Stadium.

Date-Krumm was the first to be bothered by a bee, parrying it away when it interrupted her serve. Unfortunately for the 43-year-old Japanese player, it went on the attack, and she needed help from three ballkids to rescue her.

Another bee flew at Williams in the third set, and landed on her racquet. Ignoring shouts from the crowd to "smash it", she chose to wave her hand and blow at it instead.

The bee refused to budge. Eventually, two more ballkids and a helper came out with towels to catch it and carry it off, to cheers from the stands.

"The bee was a challenge," Williams said afterwards. "I would've been remiss to swat it, I came up with a strategy to follow Kimiko's example."