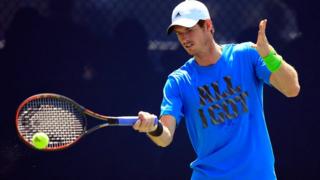 'No expectations' on Murray at US Open

Britain's Andy Murray says "no-one has any expectations of me" at the US Open ahead of his second-round match against German qualifier Matthias Bachinger.

The 2012 champion says he will "need to be ready" against former junior rival Bachinger, who upset Radek Stepanek - Murray's conqueror at Queen's Club this year - in the first round.

Bachinger says he lost contact with Murray when the Briton rose through the ranks, but is "really looking forward to playing him again" when they open the late session on Arthur Ashe Stadium at 00:00 BST on Friday.