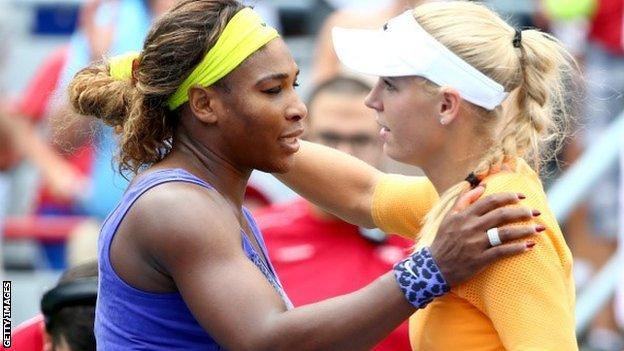 Serena Williams and Caroline Wozniacki will put friendship aside as they go for a landmark US Open title on Sunday.

The pair will meet for the 10th time overall and second in New York, with world number one Williams trying to win her sixth US Open and 18th Grand Slam.

Looking to land a maiden Grand Slam title, 24-year-old Wozniacki is in her first major final since 2009.

"It would be hard for me to imagine that I would be happy losing. I won't be," said the American, who first won the US Open 15 years ago.

"I have accomplished a lot, done a lot, not only for the sport but just a lot of things in general. I think I should be happy about that."

Williams has won eight of her nine matches against Wozniacki over five years, but the pair have met twice this summer in tight three-set encounters.

"I definitely expect another close match," said Williams. "She really knows my game well and knows how to play.

"She's so consistent. I think that's one of the things that makes her really tough."

The pair are good friends off the court, spending a holiday in Miami together after this year's French Open in June, but Williams is confident she can separate their personal and professional relationships.

"We never talk tennis so much since we spend so much of our life on the court," she said.

"Same with me and Venus. The last thing on our minds is tennis. If anything, it's to not think about a forehand or a backhand."

Wozniacki, seeded 10th, has enjoyed a return to form this summer after struggling to match 2010 and 2011, when she finished as the year-end number one.

She has made one Grand Slam final, losing to Kim Clijsters in New York five years ago, but her performances over the last two weeks have established the Dane as a force once again.

Taking on Williams in a major final is an altogether different test, however.

"She's obviously a great player, she's won so many Grand Slams," she said.

"She's a good friend of mine. We were saying when the tournament started, 'Yes, we're in separate sides of the draw, so hopefully we can meet in the final.'

"When she's on fire, she's hard to beat, but I have had two tough matches against her the last few weeks. I was really close.

"Hopefully for me that would be third time's the charm."