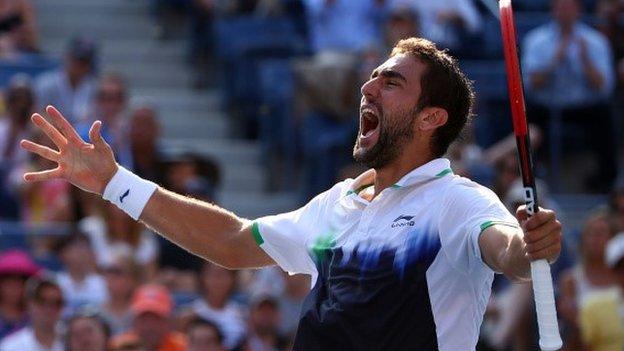 Marin Cilic knocked out five-time champion Roger Federer to reach the US Open final on a day of shocks at Flushing Meadows.

There the 25-year-old will face Japan's Kei Nishikori, who earlier upset world number one Novak Djokovic.

It will be the first Grand Slam final without Federer, Djokovic or Rafael Nadal since the 2005 Australian Open.

"It's just an amazing day for me," said Cilic.

"To be able to play like this I never dreamed of and I think today was my best performance ever in my career.

"Considering also that even when I was a set up and break up, the crowd was rooting for Roger to come back.

"It wasn't easy to deal with that, but I felt that my serve helped me a lot today, to get some free points to breathe a little bit easier. It was working perfectly."

Cilic was playing in only his second major semi-final and had a 0-5 record against Federer - yet the 6ft 6in Croat dominated his illustrious opponent.

And with the majority of rallies lasting four shots or fewer, it was the kind of match their respective coaches - Stefan Edberg on Federer's side and Goran Ivanisevic with Cilic - would have recognised from their playing days.

After the heat and humidity of the first semi-final, the second was delayed by rain for an hour and got under way in blustery, overcast conditions.

Cilic was aggressive from the outset, coming back from 40-0 down to break in game three and saving a break point in the following game, before wrapping up the set in 28 minutes of clinical tennis.

A Federer double fault and a missed forehand offered Cilic three break points early in the second, the third of which he converted with a heavy return the Swiss could not handle.

In a little over an hour, the Croat was two sets up and on course to provide the second upset of a remarkable day.

Federer, 33, had recovered from two sets down in his previous match against Gael Monfils, and the 22,000 spectators in Arthur Ashe Stadium began to believe a repeat was possible when he swept a backhand winner to finally break for 2-0 in the third set.

Cilic simply resumed the barrage on return, however, thumping a backhand winner of his own to wipe out the deficit immediately.

Try as he might, there was no escape route available to Federer this time.

Cilic got the decisive break with a stinging forehand to lead 4-3, and served out the victory with three aces and his seventh backhand winner of the day.

"I really felt like I could win this tournament," said Federer. "Obviously that's not going to happen. That's why there is always disappointment.

"I just think conditions were fast, he served great. It was one of those matches like old school tennis. It was just like full swing from all sides: forehand, backhand, serve, return. No holding back from his side.

"I just couldn't hang with him for long enough to create some doubts in his mind. I didn't play good enough overall. That's the bottom line.

"I think when a match is like this I think you can actually move on very quickly."