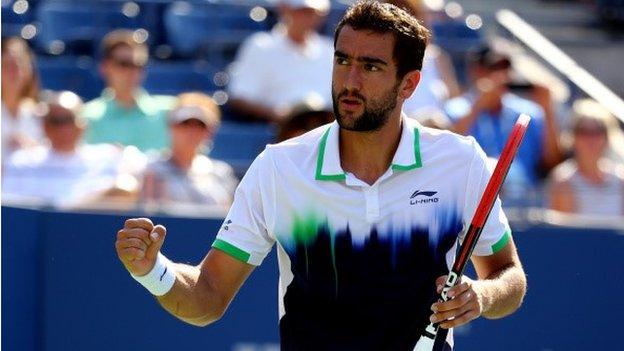 "Wawrinka opened the doors for us from the second group," said the Croat.

"Most of the guys have now bigger belief they can do it at the Grand Slams. It's a bit of a change-up year."

Cilic, 25, who is coached by 2001 Wimbledon champion Goran Ivanisevic, added: "Kei beat Wawrinka, Novak, and Milos Raonic, so he's played an amazing, amazing tournament. I think it's going to be extremely interesting for the next several Grand Slams."

Switzerland's Wawrinka, Argentina's Juan Martin del Potro and Andy Murray are the only players to win a Grand Slam title, other than Nadal, Djokovic and Federer, since Marat Safin's victory at the Australian Open in 2005.

Nishikori and Cilic, who are both currently ranked outside the top 10, claimed surprise respective wins over the top seeds, Djokovic and Federer, in the semi-finals.

Having been tipped as stars of the future in recent years, Ernests Gulbis, Raonic and Grigor Dimitrov have also moved closer to making a breakthrough after all made Grand Slam semi-finals this season.

Nishikori, who has 1989 French Open winner Michael Chang in his coaching corner, is the first Japanese player to reach a Grand Slam men's singles final, and the 24-year-old's run is all the more remarkable considering he was a doubt for the tournament after undergoing minor toe surgery.

"I didn't even know if I should come to New York, so I wasn't expecting anything," he said.

"But after playing my first match and second match, I got more confidence in my foot and there was no pain. My tennis was there already. I may have to rest for three weeks before every Grand Slam!"

He continued: "I am very happy to make another piece of history. I hope I can win and make more. I hope there will be a lot of people watching in Japan."