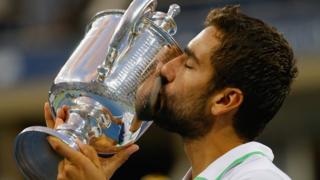 US Open win will change my life - Cilic

Marin Cilic says his life "will be completely different" after winning his first Grand Slam title with a comprehensive victory over Japan's Kei Nishikori in the US Open final.

His victory completes a Grand Slam year that has seen eight different winners of the singles titles across the men's and women's games, for the first time since 1998.