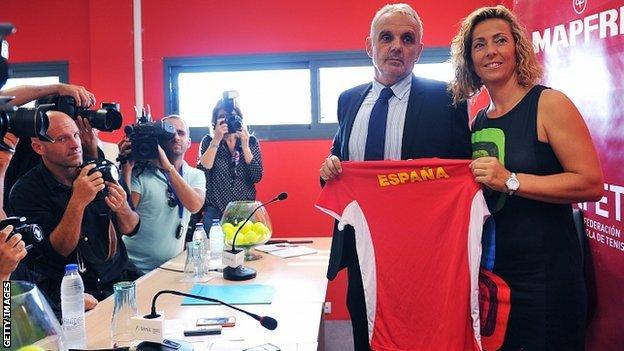 Rafael Nadal's coach has criticised the appointment of Spain's first female Davis Cup captain because she has not worked in men's tennis.

Gala Leon Garcia, 40, who achieved a career-high singles ranking of 27 in a 14-year career that ended in 2004, replaced Carlos Moya on Monday.

Toni Nadal said it is "preferable" that the captain has "a background in the world of men's tennis".

"I have nothing against her. I don't know what her capabilities are."

Speaking in an interview with Onda Cero radio, he added: "I hope she does her job well but in theory she is a person that doesn't know men's tennis, because men's tennis isn't the same as women's tennis."

He added that he would have agreed with the decision if "you could tell me that she had spent 10 years coaching" on the men's circuit.

But he said Leon Garcia's appointment would not stop Rafael, who missed the defeat to Brazil which relegated them from the World Group for the first time in 18 years, returning to the team.

Spain have a bye in Europe's first round of the 2015 competition on 6-8 March, 2015. Leon Garcia's first match in charge will be in July.