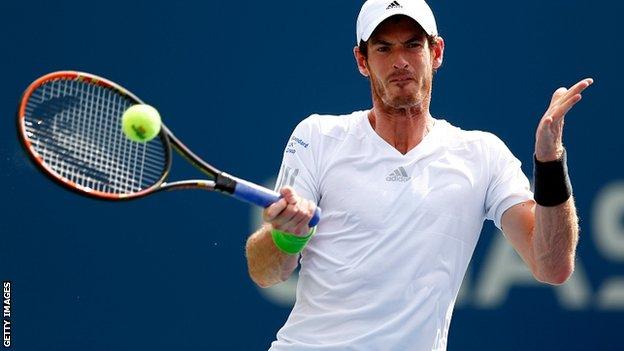 Andy Murray made a winning return to action with victory over India's Somdev Devvarman in Shenzhen.

The British number one, ranked 11th, came through 6-3 6-3 in his first match since earlier this month.

Murray is chasing points as he looks to qualify for November's ATP World Tour Finals for the top eight players.

The Scot, 27, had a bye in round one as the second seed and will play Slovak Lukas Lacko in Friday's quarter-finals.

His chances were enhanced by the departure of Spanish top seed David Ferrer, who lost 6-3 6-4 to Viktor Troicki - the Serb's best result since returning from a 12-month ban in July.

Murray reeled off five games in a row from 3-3 to take control against Devvarman, the world number 141.

The Indian player fought hard in the second set, recovering from 2-0 down to level and missing two chances to break back again in game seven.

Murray's first-serve percentage had slipped after a strong start but he came through the fleeting moments of danger to seal victory after one hour and 22 minutes.

"I thought I did pretty well," said Murray. "He makes very few mistakes - he's a solid player and he moves well.

"It was very humid out there. It was good to have a tough workout like that."

After Shenzhen, Murray is scheduled to play in Beijing and Shanghai before returning to Europe for the Paris Masters as he tries to secure a spot at the Tour Finals in London.