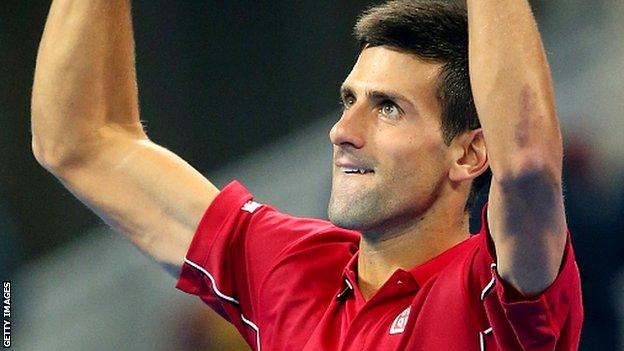 Four-time champion Novak Djokovic extended his unbeaten run at the China Open with victory over Canada's Vasek Pospisil in round three.

The Serb goes on to face fifth seed Grigor Dimitrov or Pablo Andujar.

Djokovic's wife Jelena is due to give birth to the couple's first child in the next month, but he is still targeting the year-end number one ranking for the third time in the last four years.

"It's definitely always the highest priority out there with winning Grand Slams," he said.

"That gives me plenty of motivation. It would mean, of course, a lot to me. That's why I'm out here in Beijing and (next week in) Shanghai, competing and trying to get that year-end number one."

Kvitova will play former number one Venus Williams for the sixth time on Wednesday, with the Wimbledon champion leading their head-to head 4-1 - including a close contest at the All England Club this summer.

"Every match I have played with Venus was a really great fight until the end," said the Czech.

"It's the third round in the tournament. It's very early to meet each other again, same as Wimbledon."

On a day that saw rain rule out much of the schedule on the outside courts, Australian Sam Stosur upset sixth seed Caroline Wozniacki 6-4 7-6 (11-9).

Wozniacki had won 25 of her last 31 matches, but the Dane missed five set points and double-faulted on match point - her third of the tie-break.