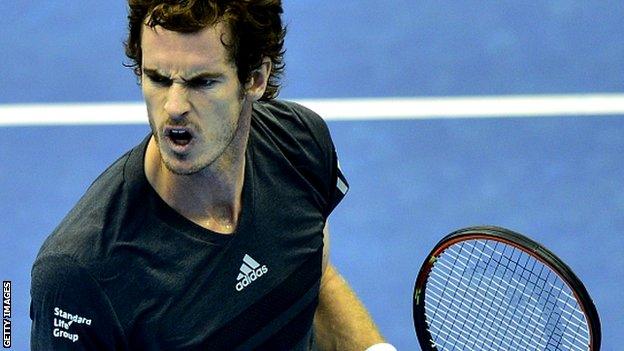 Andy Murray boosted his hopes of qualifying for the ATP World Tour Finals with a hard-fought win over Kevin Anderson at the Valencia Open.

Top seed Ferrer beat Thomaz Bellucci 6-1 6-2 and will meet Murray for the third week in a row on Saturday.

The Spaniard is 10th in the Race to London, two places behind Murray.

"The match tomorrow will be an important match, as was last week and also in Shanghai," Murray told the ATP website.

"But even if I don't win the tournament this week, I will still have an opportunity in Paris if I play well there."

Four places remain on offer following the news that Nadal has ended his season to undergo surgery to remove his appendix.

Murray's situation improved when Canada's Milos Raonic, currently ninth in the standings, lost to David Goffin in the Basel quarter-finals.

The Scot, who had coach Amelie Mauresmo courtside for the first time since the US Open in September, kept up his charge as he battled his way to a 16th win in 18 matches, despite struggling on serve early on and berating himself furiously.

With only the best six results outside of the Grand Slams and Masters events counting, Murray needed to reach the semi-finals in Valencia to add to his points tally.

The last month has brought him his first two titles of the year but there were signs of that schedule taking its toll against Anderson.

A forehand winner gave Murray a 2-0 lead but two double-faults in successive service games saw him fall a break down and, although he levelled at 4-4, another double-fault in the tie-break handed Anderson three set points.

The South African duly converted and after 77 punishing minutes, with his serve under pressure, Murray was facing a gruelling task.

Another early advantage was handed back in the second set but Murray made the decisive move in game nine, moving ahead 5-4 and serving out to level the contest.

A superb defensive lob over the 6ft 8in Anderson gave Murray his fifth break of the match at the start of the decider and, in contrast to the opening exchanges, the former Wimbledon champion was solid enough on serve to see out the match.

Three match points went begging but Murray converted his fourth, and looked a relieved man as he slumped in his chair after two hours and 43 minutes of hard work.

"It was very tough," added Murray. "There were a lot of long games, long rallies.

"I started to read his serve a little bit better at the end of the second set. I was creating a lot of chances on his service games.

"I improved my serve throughout the match. That was really the difference, but it was extremely close. I just managed to get through."