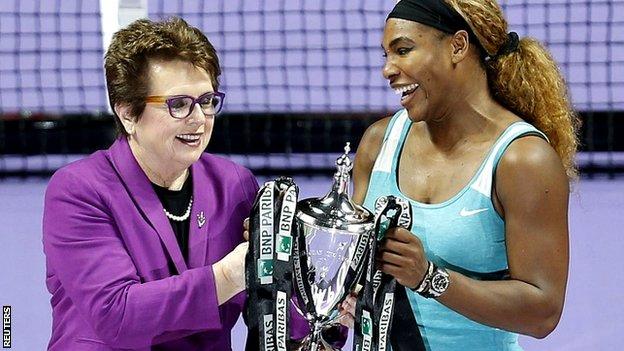 Serena Williams beat Romania's Simona Halep to win the season-ending WTA Tour Finals for the third year in a row on the event's debut in Singapore.

The American top seed won 6-3 6-0 to claim the WTA title for the fifth time.

Williams also gained revenge for against Halep in the group stage.

The 33-year-old, who won her 18th Grand Slam singles title at the US Open in September, will end the year as world number one for the fourth time.

"I had to play more Serena-style tennis and just do what I do best," said Williams.

"I was expecting a much better player than I was in the earlier round. Being ready for that really was able to help me out."

Halep could have eliminated Williams in the group stage had she lost to Ana Ivanovic in straight sets, but the Romanian lost in three to throw the champion a lifeline.

"I have no regrets, because I did my job on court against Ivanovic," said Halep. "I tried to win the match. I couldn't, but I never thought that I have to lose in two sets against Ivanovic."

Both Williams and Halep were below their best in the final, which failed to live up to the American's but once she had clinched the first set there was little danger of Williams giving up her title.

She began the match in edgy fashion, having to save break point in her opening service game before being broken in her second, but Halep could not convert a chance to move 3-1 ahead and was pegged back.

With both players struggling to find any rhythm, Williams looked to have taken charge at 4-2 only to double-fault twice in handing the advantage straight back.

Halep was ranked as low as 64 in the world 18 months ago and has enjoyed an astonishing rise, but she could not reproduce the accurate hitting that took her to the French Open final in her first WTA Finals decider.

The Romanian, 23, sprayed a backhand wide to drop serve for the third time and Williams hammered down two aces on her way to serving out the set after 46 minutes.

Despite enjoying the support of much of the crowd, who were chanting "Simona! Simona!" at regular intervals, Halep could not withstand an improving Williams in the second set.

The American cut out the double-faults and attacked the Halep serve at will as she raced into a double-break lead, before a flashing forehand return made it 5-0 and prompted a victorious raised fist.

Williams lost her first championship point with a misjudged drop shot but wrapped up the win moments later, claiming her fifth WTA title 13 years after her first in Munich.

"I knew she will play better this match because she saw how I play, she saw what she has to do during the match, so she did really well today," added Halep.