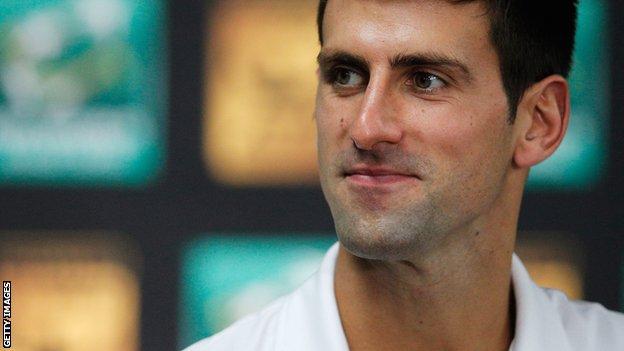 Novak Djokovic says he is not concerned about his number one ranking as he returns to action after becoming a father for the first time.

The Serb, 27, plays his first match at the Paris Masters on Tuesday since wife Jelena Ristic gave birth to son Stefan.

Philipp Kohlschreiber is Djokovic's first opponent since he lost to world number two Roger Federer in Shanghai earlier this month.

"I feel like I'm already number one becoming a father last week," he said.

It is the first indoor tournament of the defending champion's season as the players prepare for the ATP World Tour Finals in London in November.

Federer is just 490 points behind Djokovic in the ATP world rankings, with the winner in Paris receiving 1,000 points.

"I have lots of respect for what he does. I don't think that age is an issue for him. As a matter of fact, I think he's playing some of his best tennis this year.

"For me, it's important to participate in my child's life as much as I can, in his development, in his growing up, in his childhood.

"You know, I hope that it's going to affect positively on my career. In terms of my approach to the tennis, nothing is really changing. I'm still out here, still fighting, competing, and then trying to be number one of the world, trying to win tournaments."

Britain's Andy Murray, now ranked eighth in the world, will open his Paris campaign against Frenchman Julien Benneteau on Wednesday.

The Scot, who needs to reach the quarter-finals to guarantee a place at next month's season-ending ATP Finals in London, but could be confirmed before that depending on other results.