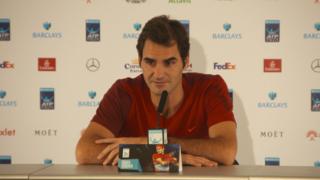 Roger Federer describes his 6-0 6-1 defeat over Andy Murray as "uncomfortable", saying "it's not so cool" to thrash the British number one.

The 17-time Grand Slam winner needed just 56 minutes to complete his third Group B victory and reach the semi-finals.

Federer says he can relate to Murray's recent dip in form and is "confident" the Scot will be playing better tennis next year.