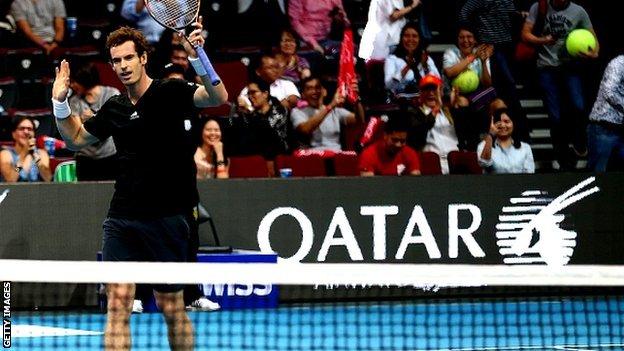 Britain's Andy Murray picked up two wins on his final day of involvement at the International Premier Tennis League exhibition in the Philippines.

The Scot and Kirsten Flipkens beat Serena Williams and Lleyton Hewitt 6-1 in the mixed doubles.

Murray then saw off Australian Nick Kyrgios 6-5 in the singles, which was decided by a five-minute shootout.

It brought an end to the Briton's participation in the inaugural IPTL, and he will now head to Miami to begin his annual off-season training block.

"I think a lot of people were sceptical about it," Murray said of the IPTL.

"But if you look at the amount of people who have showed up here, there's been unbelievable support from Friday through to Sunday; it shows the people here love tennis. I hope we can come back next year and do it again."

After failing to register a victory over the first two days in Manila, Murray got on the scoreboard alongside Flipkens in a one-sided doubles as world number one Williams made her debut in the competition.

The American made amends in the following singles set with a 6-3 win over Flipkens.

It looked as though Murray's year would end with a defeat when he trailed the big-serving Kyrgios 5-4, but the former Wimbledon champion broke back to force a shootout.

With the 20-second shot clock driving the pace of play and the winner decided over the course of five minutes, Murray let a 4-0 lead slip and led 6-5 as the clock counted down.

A lengthy baseline rally had the crowd enthralled with victory up for grabs, and Kyrgios cracked first with a backhand into the net.

The four-team competition will now move to Singapore for three days, starting on Tuesday, before heading to Delhi and Dubai. Novak Djokovic and Roger Federer are among the players set to feature.