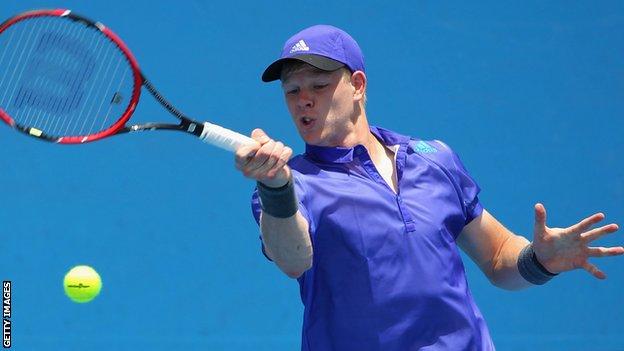 Britain's Kyle Edmund qualified for a Grand Slam for the first time in dramatic style with victory over Dane Propoggia at the Australian Open.

It is the first time since 2002 that Britain has had three men involved at the start of the singles in Melbourne.

Liam Broady could not make it four, losing 7-5 6-3 to Michael Russell.

Edmund's first-round opponent will be 25-year-old American Steve Johnson, a player ranked 39th in the world - 153 places above Edmund.

Asked about the partisan crowd, he added: "I dealt with it pretty well. You're obviously prepared for that when playing an Australian in Australia, you're going to get some banter from the crowd.

"It's no different from Wimbledon where they're going to support me."

Both players began strongly but found it hard to break down similarly in-form opponents, and it was Broady who cracked first on court nine.

The 21-year-old from Stockport, who rose quickly up the rankings last year, found the durable Russell - 15 years his senior - just too consistent in windy conditions.

Russell, 36, is ranked 37 places higher than Broady at 156 and playing in his 10th Australian Open, and that experience told.

Broady had a chance with a break point at 4-4 but after that slipped by his form dipped, with the American breaking to lead 6-5 and doing likewise early in the second set.

"I just lost a bit of rhythm and he's a very smart, very experienced player, and it showed today," Broady told BBC Sport.

"It's been a fantastic trip - it obviously exceed expectations of probably most people apart from my own little group."

Over on court six, the impressive Edmund turned around a match that could have easily gone against him, such was the form of world number 323 Propoggia.

The Australian, urged on by a vocal set of supporters, edged the first set in a tie-break and was within sight of victory as the second went with serve.

It took 90 minutes for Edmund to finally break serve but when he did so, it brought him the second set.

However, the Yorkshireman stumbled while serving for the match at 5-3, blasting a forehand long to hand Propoggia the break back and prompting some exuberant celebrations from the Australian.

With no tie-break in the final set, the games ticked by as both players looked remarkably solid, until Propoggia let his guard down from 40-0 at 8-7.

Edmund worked his way back to deuce, fired a brilliant backhand winner down the line to earn match point and watched as Propoggia dumped a volley in the net to end the contest.

"Serving for it at 5-3 but getting broken - it's always in the back of your mind that you had that chance," added Edmund.

"You've just got to reset and try and get that break again."