The Spaniard, 28, won 6-3 6-2 6-2 in his first match at a Grand Slam since Wimbledon following injury and illness.

The Serb was one of eight seeds to lose but second seed Maria Sharapova, third seed Simona Halep and sixth seed Eugenie Bouchard all advanced in straight sets.

Nadal, who is a 14-time Grand Slam winner, had only played eight matches since a shock defeat by Australian teenager Nick Kyrgios at Wimbledon last year.

Before the tournament, he played down his chances of winning a second Australian Open title but showed glimpses of his best against world number 49 Youzhny.

"I was a little bit under doubt before, but I think I played without making too many mistakes and the only way to get better is to win more matches so it will probably help me," said Nadal.

"In general I was working well, returning well and I just need to build a little bit, such as being more dynamic with the movements sometimes. But for the rest I am more or less happy."

Ivanovic one of eight seeds ousted

Serbia's Ivanovic appeared close to tears as she dissected her shock first-round exit against Hradecka in front of the post-match media.

"I think the whole match I didn't really feel like myself out there. I had some issues. You know, it's probably the worst thing that could happen," she said.

But the 2008 runner-up was not the only seeded female to suffer an opening-day exit, with a quarter of the seeds falling.

Marriage advice for Murray? Stay together - it's cheaper

It goes without saying that legendary coach Nick Bollettieri, who has helped the careers of the Williams sisters, Andre Agassi and Monica Seles among countless others, knows more than a thing or two about tennis.

And the 83-year-old is also an expert on marriage - having tied the knot eight times. So who better to give Andy Murray some advice as he prepares to marry girlfriend Kim Sears later this year?

"Here's my advice. One, it's much cheaper to stay together forever. Two, when you get married make sure you sign a certificate that you get the alimony," the American joked on BBC Radio 5 live.

Any locals who decided to camp out on court three had their money's worth on day one.

Two years ago, Kokkinakis lost to good friend Nick Kyrgios in the junior final, and the rude health of Aussie tennis was highlighted when 19-year-old Kyrgios overcame some back issues to beat Federico Delbonis in the Margaret Court Arena night match.

That made it six Australian men into round two - and just six wins from ending the locals' 39-year wait for a men's champion.

Bernard Tomic, 22, was among the early winners - beating Germany's Tobias Kamke - and when the vocal home supporters known as 'Fanatics' began chanting that he was 'Australia's number one', he responded "Number two!" in deference to Kyrgios.

The sometimes troubled, often wayward, but supremely gifted Tomic is clearly enjoying being part of an Aussie crowd. "For sure it's changed," he said. "I think Lleyton Hewitt and I playing so well a few years ago gave a lot of confidence for younger kids wanting to succeed."

Li Na back - and with news

Li Na, who won the women's title last year before retiring in September, was invited on court before Roger Federer and Yen-Hsun Lu opened the evening session on the Rod Laver Arena.

The 32-year-old announced to cheers that she and her husband are expecting their first child.

"It really feels like this baby is going to enter the world already having about 15,000 friends," the Chinese, who was also runner-up in Melbourne in 2011 and 2013, said later.

Spectators have been warned about using selfie sticks during matches because they might distract players and annoy other fans.

Instead, they can go to dedicated 'selfie zones'.

"We encourage selfie sticks at Melbourne Park," an Australian Open spokesman told the Herald Sun. "We just rely on people to not use them where they impede someone's view."

Rafael Nadal is confident he can pull off his pink-trimmed short shorts. "These are the shorts I was using for parties in the last couple of months. I like the bright colours, Australia is a happy country, a sports country and these people bring me very positive energy so this is the right place to wear them."

Grigor Dimitrov believes he has found a winner with his present hairstyle. Asked about the possibility of a new cut, he replied: "I think I'm past that stage. I've had a lot of haircuts, but I think visually it looks pretty good."

Andy Murray is pleased that the "Andy Army" have broadened their repertoire. "They actually changed a few songs," he said. "The last few years they had a lot of the same ones. I was hoping that they are going to change a few of them."

Marinko Matosevic, once known as 'Mad Dog', is Andy Murray's next opponent and the Australian says he is mellowing at the grand old age of 29. "I guess I'm maturing in my old age," he said. "I'm definitely a late-bloomer. I guess mentally-wise as well I'm a late-bloomer in that department as well."

"I think this is very sort of like philosophical question." Seventh seed Tomas Berdych is asked where his game is after a straight-sets win over Alejandro Falla.

"I was talking to my coach and I told him I actually did feel like I won the Australian Open." Australia's Jarmila Gajdosova finally gets a victory at her home Slam at the 10th time of asking.

Victoria Azarenka turns the tables on the Australian Open crowds, snapping the public on her way in for some Monday practice. 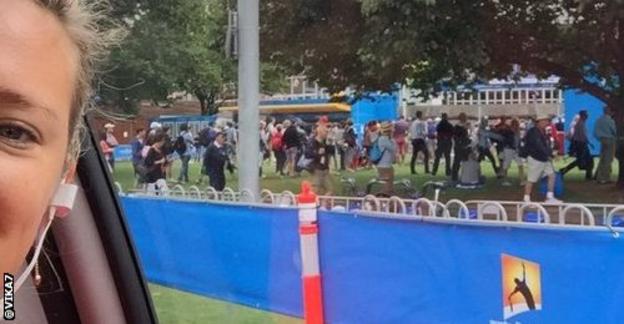