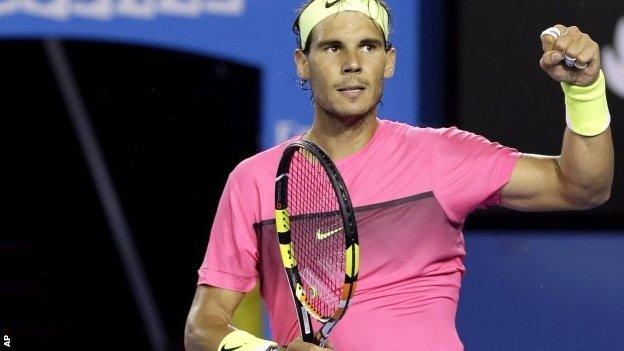 Nadal suffered no repeat of the cramp that affected his previous match as he beat Israel's Dudi Sela 6-1 6-0 7-5.

Sharapova had to save match points in round two, but swept past 31st seed Zarina Diyas 6-1 6-1.

Players have been reacting to Federer's shock defeat.

Andreas Seppi: "To beat Roger first time, especially in a Grand Slam, best-of-five, is a special moment for me. At the beginning I just went on the court to enjoy the match and to play my best tennis."

Andy Murray: "It's obviously surprising, but upsets happen in sport daily. I don't know if Roger played badly or in Seppi played unbelievable, but if Roger was not playing so well, it's quite easy to lose at this level."

Nick Kyrgios: "I wasn't like really surprised. I knew Seppi is capable of playing that sort of tennis, he beat some of the top guys. I don't think Roger played too bad at all. It was a tough match. Obviously I'd rather play Seppi than Federer, of course.

"There was a little part of me [that wanted to play Federer]. It's hard not to think about playing possibly the greatest of all time. Everyone wants to play Roger."

Kyrgios and Tomic kept home hopes very much alive with confident straight-sets wins to make the fourth round.

Murray hits back over "unfair" criticism

Andy Murray expanded on the sentiment expressed in a tweet 24 hours earlier by telling the media how he felt he was treated when cramping last year.

The British number one felt the reaction to Rafael Nadal's win over Tim Smyczek on Wednesday was markedly different to when he cramped during his four-set win over Robin Haase at the US Open.

"Some of the stuff that was said about me I thought was completely unfair," said Murray.

"The other night kind of proved it. I didn't watch the whole match the other night, but clearly Rafa was struggling pretty badly.

"It was a great effort to come through it, which rightly is what everyone was saying, but that certainly wasn't the case at the US Open when I was in a similar state. I just don't understand why that would be the case."

Tomas Berdych has had quite a week, getting engaged to girlfriend Ester while launching another assault on a first Grand Slam title - he reached the fourth round on Friday.

The Czech has enlisted the help of coach Dani Vallverdu, having taken on the Venezuelan after his departure from Team Murray in November.

After trying and failing to get Ivan Lendl on board, it seemed likely that Berdych had been given the nod by his illustrious compatriot to hook up with Vallverdu, but apparently not.

"It's not about recommending," Berdych told BBC Sport. "That meeting [with Lendl] was mainly about me trying to bring Ivan to my team and it didn't work out, and that was it.

British success in the doubles

There was doubles success early on day five as both Jamie Murray and Dom Inglot made it through to the last 32.

Inglot and Mergea are in line to face top seeds Bob and Mike Bryan next.

Heather Watson's doubles campaign with Alexandra Panova came to an end on court seven with a 6-0 6-2 defeat by Russians Kudryatseva and Pavlyuchenkova.

"I wish I believed maybe if we played at night I would have been more comfortable, but at this point who cares, right? I mean, like I'm on the plane and he's not, so…" Roger Federer is not about to put his defeat down to scheduling.

"It's fine in the locker room. I'm sure you imagine like Mean Girls or something. It's not like that. It's pretty chilled, pretty relaxed. We're all friendly and talking to each other and that's fine." Eugenie Bouchard on the atmosphere.

"I think I am now, yeah. We have a small country, so everyone knows me now." Simona Halep might be the world number three and French Open finalist, but fame has been a while coming for the Romanian.

"I did lefty, two hands on both sides. Like at the circus, I do everything." Maria Sharapova describes her early years trying to play two-handed off both sides.