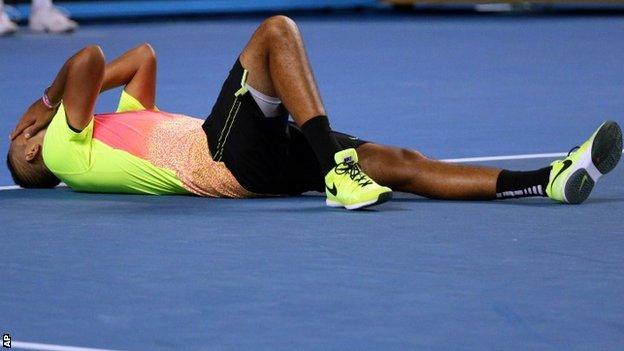 He faces Andy Murray in the last eight after the Briton beat Grigor Dimitrov.

"When I saw I had finally won the match it was incredible. It was the best feeling I ever had," said Kyrgios.

Australian fortunes suffered earlier when Bernard Tomic was knocked out.

That heaped the pressure on Kyrios to keep home hopes alive on Hisense Arena, and he did so in the most dramatic style.

Seppi looked on course to back up his stunning win over Roger Federer in the previous round when he moved two sets clear, with a frustrated Kyrgios smashing his racquet at one point.

But with the home crowd behind him, the teenager from Canberra - who beat Rafael Nadal at Wimbledon lat summer - launched a stirring comeback.

After taking the third set, Kyrgios saved a match point on serve at 5-6 in the fourth and levelled with a drilled backhand winner in the tie-break.

He had struggled with a back injury in recent weeks but remained the dominant force as he surged into a 4-1 lead in the decider, only for Seppi to level with 12 straight points.

The drama on Hisense was now dominating the whole of Melbourne Park, with the match on Rod Laver Arena between Murray and Dimitrov repeatedly interrupted by the cheering.

Kyrgios saved another break point at 4-4 and finally clinched victory after three hours and 34 minutes when Seppi sent a backhand wide.

"To know the body could come back from two sets to love, knowing I haven't had matches, it's just massive confidence," said Kyrgios.

"I think the turning point was definitely the break in the third set. That just established that I wasn't going to go away. I was just going to compete until the very end.

"When I got to the third set, I started playing really well. I knew if I could just hang on some way and take it to a fifth set, it's anyone's match."