The Serb, who has yet to drop a set in the tournament, will face Canada's Milos Raonic in his 23rd consecutive Grand Slam quarter-final.

Djokovic gears up for Raonic test

The world number one will now turn his attention to facing Milos Raonic after the eighth seed became the first Canadian since Michael Belkin in 1968 to make the quarters.

Djokovic, who regularly practises with Raonic in Monaco where they both live, has been impressed by his rival's progress.

"He's been playing some great tennis in the last 15 months. He deserves to be where he is now, top 10, coming closer to top five in the world," he said.

* Who is missing? Roger Federer - who lost to Andreas Seppi.

Serena Williams was in danger of another defeat by Garbine Muguruza as the Spaniard attacked her second serve mercilessly in the early stages.

The Spaniard then had six chances to break in a game of eight deuces at 1-1 in the decider but Williams clung on, despite a mid-game coughing fit.

"I think I caught that bug," said the American. "I've just been sick. I've been fighting it with vitamin C and all kinds of stuff. But I just have a really bad cough."

Get in line for Nishikori

It is not usually until the semi-finals that the pressure for media seating becomes an issue, but interest in Kei Nishikori saw his fourth-round match against David Ferrer deemed "high profile".

Japanese written journalists at Melbourne Park number 37, and that is before counting their broadcast counterparts, prompting a lengthy queue for tickets on Monday morning.

Their man duly despatched Ferrer in three sets to tee up a tantalising quarter-final against defending champion Stan Wawrinka.

"In Florida, nobody talks to me," said Nishikori. "In Japan, yes, it's a little bit different. Lots of people recognise me. It's not easy to walk on the street. But I really enjoy living in Japan because that's my home. They have much better food."

Britain's Dom Inglot and Romanian partner Florin Mergea enjoyed a stunning 7-6 (7-4) 6-3 win over top seeds Bob and Mike Bryan, but Jamie Murray could not join them in the last eight.

Murray saw his hopes of a second Grand Slam title end as he and Australian partner John Peers were beaten in the third round.

British junior Katie Swan is through to the last 16 of the girls' singles, and cites Maria Sharapova and Eugenie Bouchard as her inspirations.

The 15-year-old is originally from Bristol but has lived in Kansas for two years after her father moved there for work.

"I love Sharapova and Bouchard. I love the way they're both really aggressive and they fight really hard. That's what I want to do."

"I would be quarterback for sure or linebacker. Oh, god, I would love to be a linebacker." Serena Williams has her eyes on a starting place in Sunday's Super Bowl.

"I'm thinking I'm going to go buy a new handbag. Not sure which one yet. But that will probably be my purchase." Madison Keys already has plans for the guaranteed cheque of £180,000 as a quarter-finalist.

"This guy's got the X-factor, so it's working out well." Dom Inglot explains why new doubles partner Florin Mergea is the right fit.

"I heard a bunch of photos bursting, so I want some pictures. If I did the full split that's going to be legendary. Seriously." Victoria Azarenka heard the clicking of a thousand cameras as she fell over.

"I have to compensate my height with something, so I just put a lot of energy in my tennis. I go for my winners and I'm just not like a typical small player that I'm just defensive. I'm going for it and that's my tennis." Dominika Cibulkova talks up the benefits of being 5ft 3in in a world of 6ft opponents. 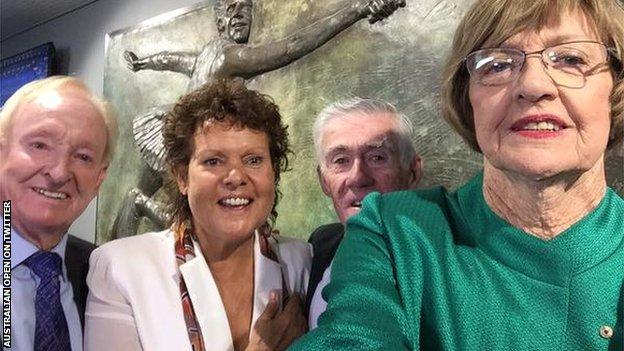