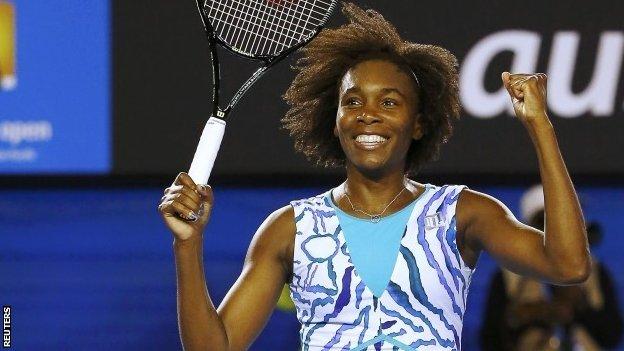 Venus will play sister Serena, who beat Garbine Muguruza 2-6 6-3 6-2, in the semi-finals, if they both win again.

Top seed Serena, who has not advanced past the quarter-finals at Melbourne Park since winning her last Australian Open title in 2010, had trouble breathing at times and coughed throughout her match against Muguruza.

She also struggled for form early on, but fought back to avenge her defeat by the Spaniard at last year's French Open.

"I had to play the best match of the tournament or else I was going to be out," said Serena, who next faces Slovakia's Dominika Cibulkova.

"She was just hitting winners like left and right. Every shot I hit, she basically hit a winner on. So I had to change my approach."

Venus was pushed hard, too, losing the second set as her level dropped before regrouping and upping the power to clinch the decider.

Asked what had inspired her successful run in Melbourne, Venus said: "Definitely my sister Serena, she's just the ultimate champion.

"And definitely a lot of inspiration from all my fans who have stayed behind me through thick and thin."

Venus, whose best performance at the Australian Open is a runner-up finish in 2003, last reached the quarter-finals of a Grand Slam at the US Open in 2010.

Keys is relishing the prospect of facing one of her childhood heroes.

"I'm just really excited. It's a huge opportunity for me," she said.

"I think Venus has helped the sport, especially the women's side with equal prize money. She was a huge part of that. Just watching her is inspirational.

"She's had her health battles but she loves tennis. She's still out there and she's doing it remarkably well. I hope I can be someone similar to that."