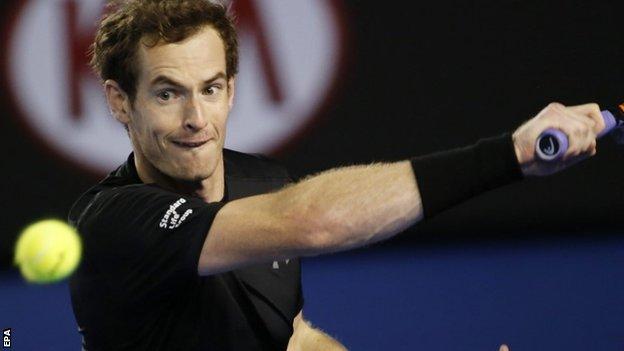 Kyrgios threatened a comeback in the second set tie-break but two superb lobs helped the Scot to a crucial lead.

The sixth seed is through to his fifth Australian Open and 15th Grand Slam semi-final.

In the last four he will take on seventh seed Berdych, now working with Murray's former coach Dani Vallverdu who left the Briton's team in November.

While Berdych enjoyed a landmark win over Rafael Nadal in his quarter-final, Murray overcame the great new hope of Australian tennis - and a packed and expectant crowd on Rod Laver Arena.

"I didn't go into it obviously thinking like that," said Murray about facing the home favourite.

"I was just trying to win against Nick, which was tough because he has an exceptional serve and makes it very difficult for you when he's serving.

"And it was very tricky conditions as well, so I was quite happy with the way I handled everything tonight."

The dominant force from the outset, particularly on serve, Murray used a variety of spins and angles to keep Kyrgios off balance.

When Kyrgios did suggest a fightback, the Briton was able to find a big serve or a winner to halt the momentum.

Two terrific lunging returns set up a break point in game six and a sliced backhand drew the error when Kyrgios went for too much.

On a cold and breezy evening, the home crowd needed their man to bring a bit of heat to the contest and, after saving an early break point in the second, he worked his way into the match.

A tie-break was required and Kyrgios looked likely to take it when he turned around a 2-0 deficit to lead 4-3 with a break, but Murray played a magical forehand lob to wrestle back the initiative.

The Australian had a half-chance facing a second serve at 5-5 but could not make the return, and Murray produced another winning lob off the backhand to clinch the set.

A furious Kyrgios risked a point penalty when he smashed his racquet, having earlier been warned for an audible obscenity, but at least escaped that punishment as he faced the prospect of recovering from two sets down for the second time in three days.

Murray further tightened his grip when he made it a hat-trick of unplayable lobs on the way to breaking for 4-2 in the third, only to slip up with the finish line in sight.

It took nearly two hours for Kyrgios to earn a break point but he converted his second when a distracted Murray netted a backhand, and the crowd came to life.

Murray needed to snuff out the danger quickly and he did just that, thanks in part to a poor line call at 30-0 down which he capitalised on with two thumping cross-court forehand winners.

It left the British number one serving for the match, and there were no alarms this time as he sealed it with a smooth forehand winner down the line.

"It was a really good experience," said Kyrgios, who was aiming to become the first Australian man to reach a Grand Slam semi-final since Lleyton Hewitt in 2005.

"That was my first Aussie Open Grand Slam match playing on Rod Laver, so that was really cool. But he was way too good for me tonight.

"I thought he served really well. A lot of variety. I thought if I could get that second set it's a totally different match, but he won the second set and he was too good."