Andy Murray says Tomas Berdych is "slight favourite" for their Australian Open semi-final as he is being helped by the Scot's ex-coach Dani Vallverdu.

Murray, 27, parted company with Vallverdu in November, allowing him to link up with seventh seed Berdych.

"Dani knows my game inside out. I would expect he would come up with a great game plan," Murray told BBC Sport.

"It should be perfect with how much time I've spent with Dani. He knows my game probably better than anyone."

The British number one, who is the sixth seed in Melbourne, added: "I think it's a huge advantage. With the way Tomas has been playing, I would expect that he would go into the match probably as the slight favourite."

Murray had earlier played down Vallverdu's influence during his news conference after the 6-3 7-6 (7-5) 6-3 win over Nick Kyrgios in the quarter-finals.

"Maybe I'll find it weird on the day but it's just something that you deal with as a player," he said.

"My goal isn't to beat Dani; my goal is to beat Berdych. So I don't think about that in the next few days.

"I also know what Dani thinks of Berdych's game because he's told me, so it works both ways."

Murray brought Amelie Mauresmo in as coach last June following the departure of Ivan Lendl in March, and Vallverdu left the team at the end of the season along with fitness trainer Jez Green.

The 28-year-old Venezuelan, who has known Murray since they trained at an academy in Spain as teenagers, began working with 29-year-old Berdych in the off-season.

He has helped guide Berdych to a second successive Australian Open semi-final, and the Czech will take a 6-4 record against Murray into Thursday's match.

"He changed a lot of positive things," the 2010 Wimbledon finalist said. "And the best is I'm able to execute them really, really quickly. That's how it should be."

Vallverdu was part of the support team that helped Murray win Wimbledon and the US Open, as well as Olympic gold, within a 12-month period.

"To be honest, I don't really want to talk about what Dani's strengths and weaknesses are," Murray added.

"I'm happy to talk about Berdych and what his strengths and weaknesses are, but I don't want to discuss what Dani does well and doesn't do well.

"Because, like I said, I'm not playing against him. I don't think in loads of sports people talk about other players' coaches and managers and whatnot.

"Coaches talk about each other, but it's not for me to discuss." 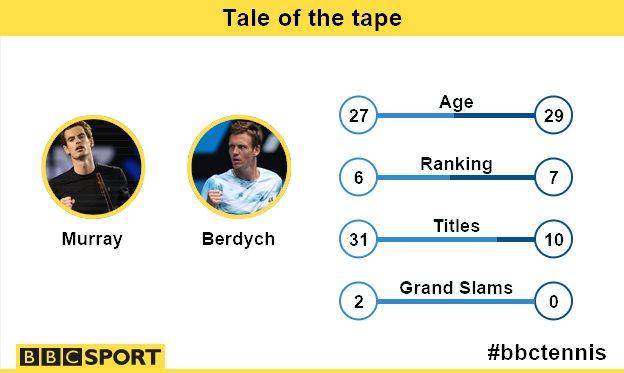