Serena Williams will face Maria Sharapova in the Australian Open final after the pair won their semi-finals in straight sets in Melbourne.

Williams, 33, capped a fine performance with a dramatic ending as she saw seven match points slip by at 5-1, before converting her ninth with an ace and a scream in the following game.

Keys, 19, matched Williams for power but not always control as the 18-time Grand Slam champion edged a tight match over one hour and 24 minutes.

The world number one, a five-time champion in Australia, recovered from 3-0 down to force a tie-break and clinched it with a big serve. 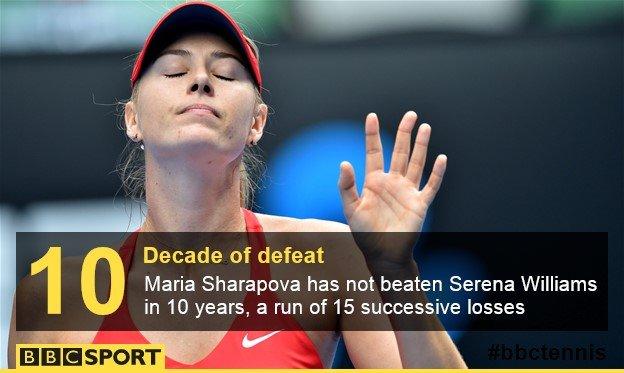 A fired-up Williams bounced up and down in delight at the baseline, and powered on with a break at the start of the second as she began to dominate the Keys second serve.

Williams flipped a brilliant forehand winner around the net post on her way to breaking again at 4-1 and eventually closed out after that gripping seventh game.

Sharapova, the 2008 champion, had earlier needed one hour and 27 minutes to beat 10th seed Makarova for the sixth time in six meetings.

The 27-year-old coped well on serve after saving two break points in a testing 10-minute opening service game, easing into a 4-1 lead.

Makarova, 26, hinted at a comeback when she broke for 4-3 but Sharapova responded immediately and served out the set after 48 minutes.

When she hammered away a backhand for the double break at 3-0 in the second, there was no way back for Makarova.

Sharapova made it six games in a row, saving two more break points at 4-1, to seal a place in her 10th Grand Slam final.

The Russian has a 2-16 record against Williams and has not beaten the American since 2004.

"I think my confidence should be pretty high going into a final of a Grand Slam, no matter who I'm facing and whether I've had a terrible record - to say the least - against someone," said Sharapova.

"It doesn't matter. I got there for a reason. I belong in that spot. I will do everything I can to get the title."

"So it's a new match. She has nothing to lose, once again. She has only things to gain. And I feel that way too."

It is the question that has followed him around for the last few years and finally Lleyton Hewitt has revealed when he will call it quits.

The 33-year-old former world number one, US Open and Wimbledon champion plans to see out 2015 before taking up the captaincy of Australia's Davis Cup team.

"I've thought long and hard," he said. "I plan to play the Aussie Open next year and most likely finish then.

"I'll be looking towards the grass-court season and most likely finishing here in Melbourne, which for me would obviously be special, to play 20 Australian Opens."

British junior Katie Swan kept up her fine run in the girls' singles with a 6-4 6-3 win over American Raveena Kinglsey in the quarter-finals.

The 15-year-old from Bristol, but based in Kansas, will play her good friend and Hungarian fifth seed Dalma Galfi in the last four.

"We played twice last year, she won in the Winter Cup and I won the Summer Cup, so we're 1-1," said Swan.

And the prospect of playing in a final on Rod Laver Arena? "At the beginning of the tournament I thought that will be amazing for whoever's in the final - I didn't think it could be me."

"Sit at a bar?" Maria Sharapova comes up with a novel idea for how best to prepare for a Grand Slam final.

"She was 17, super young, and I think I was basically underhand serving. It was in LA."

Serena Williams recalls the last time she lost to Maria Sharapova in 2004.

"It's definitely not even tennis, more the head." Ekaterina Makarova explains the difference between playing a Grand Slam quarter-final and a semi-final.

"Timing is everything, which is why I talked Pat out of the role and talked myself into it. I think it's important, too, that those young guys have somebody a bit more contemporary to deal with." Former US Open semi-finalist Wally Masur, 51, on why he agreed to become Australia's interim Davis Cup captain.