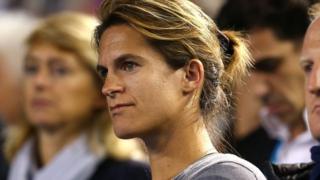 Andy Murray's coach Amelie Mauresmo says the atmosphere in the Scot's camp is "really good" and the whole team helps him control his emotions, after his Australian Open semi-final victory over Tomas Berdych.

The Frenchwomen, who was brought into Murray's team two weeks before Wimbledon last year, says she hopes the Brit can silence some of the critics in the Australian Open final on Sunday.

Watch live coverage of Andy Murray in the men's final of the Australian Open, Sunday 1 February, 08:15 GMT on BBC One and the BBC Sport website.