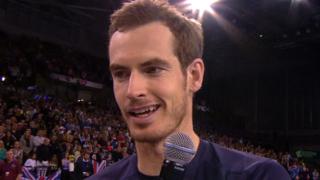 Great Britain's Andy Murray says "it's a pleasure to be part of this team" after his straight sets win over American John Isner in Glasgow secured them a place in the Davis Cup quarter-finals.

The Scot, who saved three set points in set one, won 7-6 6-3 7-6 to give Britain an unassailable 3-1 lead against the United States in the World Group first-round tie.

Britain will next play France at home in July, with the venue to be decided.