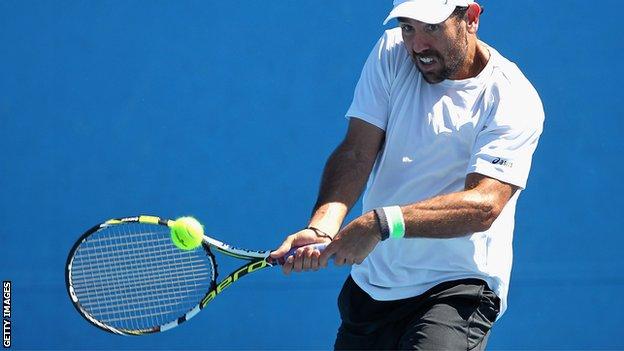 Odesnik, 29, tested positive for several banned substances, including steroids, in December and January.

The American, ranked 267th in the world, announced his retirement within minutes of his ban becoming public.

The latest doping violations followed a two-year ban in 2010 for possessing human growth hormone (HGH). The ban is the longest in the sport's history.

Murray told BBC Sport: "It is good for tennis that they got him off tour. It is the end of his career and he can't even come on site to events or coach. That is a good thing.

"He is a cheat and it is good for everyone in tennis he is dealt with in the right way."

Earlier, when news of the ban was announced, the British number one tweeted: "Bye bye Wayne... Good riddance."

Murray's comments were echoed by Andy Roddick, the 2003 US Open champion and a former world number one.

The American, who is now retired, tweeted: "I hate that he has a US flag next to his name when he's cheating. Good riddance."

Odesnik's best result at a Grand Slam came in 2008, when he reached the third round of the French Open.

He also reached the 2009 final of the US Men's Clay Court Championship in Houston, his only ATP World Tour final.

He achieved his highest world ranking of 77 in April 2009.

In his statement announcing his retirement, Odesnik claimed he had "unknowingly ingested a contaminated over-the-counter supplement" and said he was "heartbroken".

As a result of his latest violation, Odesnik's results at this year's Happy Valley Challenger event, Australian Open and Maui Challenger event will be disqualified and the ranking points and prize money forfeited.

Odesnik's first suspension came after he was found to have eight vials, each containing six milligrams of HGH, in his baggage when stopped by Australian customs officials.

The ban was cut to 12 months after he gave "substantial assistance" to the International Tennis Federation.