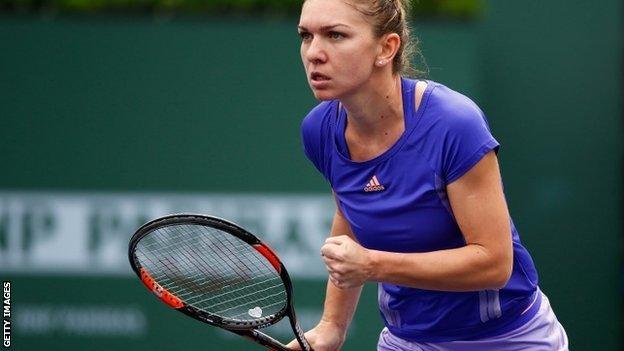 Jankovic, 30, looked in control after winning the first set with three breaks of serve and breaking early in set two.

The decider was also dominated by breaks of serve with four in a row but Romanian Halep held at 3-3 and recorded the 18th break of the match to win it.

"Simona was unbelievable," said Jankovic. "We were running like two dogs and in the end I couldn't keep up any more. She's the younger one."

Halep, who received a bye to the final after Serena Williams pulled out of their semi-final with an injury, was expected to be fresher, having had three days off.

But it was 2010 Indian Wells champion Jankovic who began more aggressively, breaking in the opening game.

The number three seed broke back immediately but two more breaks by Jankovic saw her wrap up the first set.

The second set was a topsy-turvy affair with the players exchanging six breaks of serve before Halep held and broke Jankovic to level the match.

The momentum seemed to be with the Romanian with a tiring Jankovic repeatedly looking to her coach for inspiration.

But the former world number one broke fortuitously in game three when a backhand clipped the top of the net and landed in.

That sparked another flurry of service breaks that saw the score move on to 3-3.

Eventually Halep held and then broke Jankovic's serve to lead 5-3 but the Serb summoned up enough energy to hit back in the next.

However, fittingly, the match ended with another break.

A ninth double fault gifted Halep three Championship points and she powered a forehand down the middle of the court to wrap up the biggest win of her career in two hours, 37 minutes.

After winning her third title of the year, Halep said: "It was an amazing final and I'm really happy I could win. It's my biggest title and I'll never forget it."