Andy Murray will have British company in the men's top-100 rankings after Aljaz Bedene was granted a UK passport.

BBC Sport revealed in May how the 25-year-old Slovenian, a UK resident since 2008, wanted to switch allegiance.

He will be able to compete under the British flag on tour as soon as he has submitted his new passport details.

The world number 83 is now planning to appeal against a new rule which prevents players from ever representing more than one country in Davis Cup.

The International Tennis Federation introduced a rule change on 1 January which stops players from representing a second nation in the Davis Cup, Fed Cup or Olympics.

Bedene turned out for Slovenia in Davis Cup action in 2010, 2011 and 2012 but will appeal on the grounds his passport application was lodged before the rule change came into place.

Ajla Tomljanovic, who was born in Croatia but is now applying for an Australian passport, is in the same position and those close to Bedene are optimistic he will receive a sympathetic hearing. 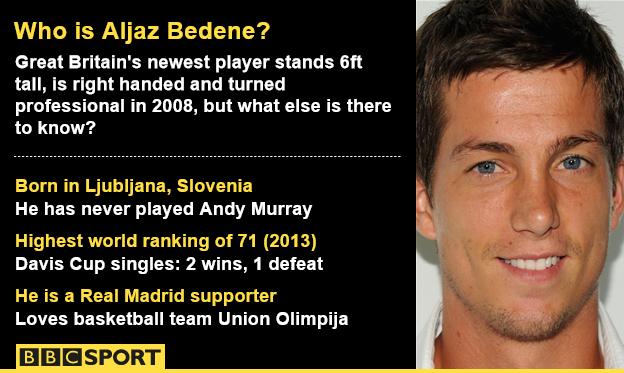 A defeat in the final of the Chennai Open to Stan Wawrinka and victory in last week's highly competitive Challenger event in Texas have boosted his ranking from 145 at the start of the year.

He now plans to attend a citizenship ceremony near his home in Hertfordshire in the very near future. He will be required to take an 'Oath or Affirmation of Allegiance to Her Majesty the Queen,' and make a 'Pledge of Loyalty' to respect the rights, freedoms and laws of the UK, before receiving his certificate of nationality.

The Lawn Tennis Association provided Bedene with legal support during his passport application, but there is no guarantee his switch to British colours will be universally popular with other players.

Johanna Konta's switch from Australian to British nationality in 2012 did not ruffle many feathers, but Greg Rusedski's move from Canada in 1995 did cause controversy.

When the BBC revealed Bedene's intentions last year, the British Davis Cup player Dan Evans tweeted: "So a guy is becoming British who has already played for his country. Doesn't quite sound right to me!"

Bedene's arrival will evidently boost Britain's strength in depth. With James Ward on the cusp of the world's top 100, Kyle Edmund in the top 150 and Liam Broady not too far behind, Andy Murray may soon have more regular company in the men's draw of the Grand Slams.